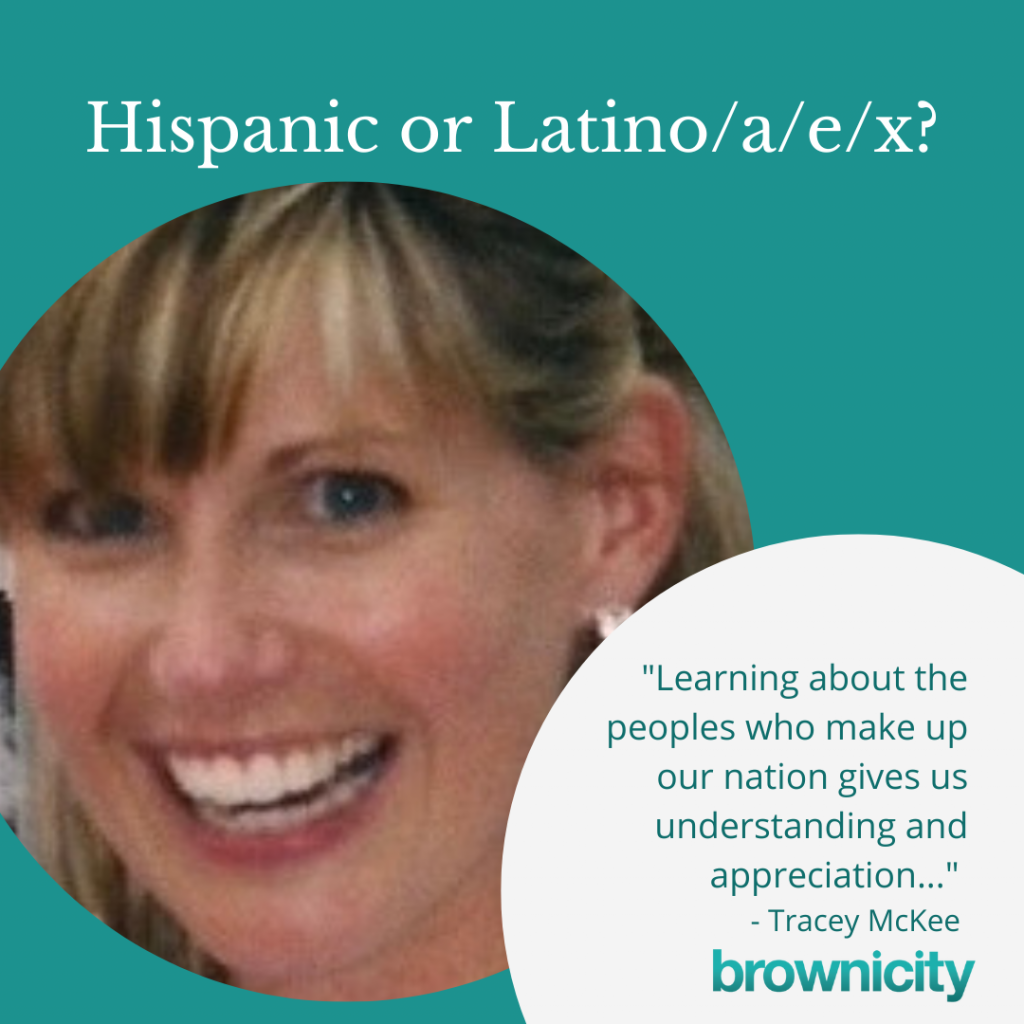 We are in the midst of National Hispanic Heritage Month – a month dedicated to celebrating the culture, accomplishments, contributions, and histories of Americans whose ancestors came from Spain, Mexico, Central and South America, as well as the Caribbean. These Americans represent nearly 20% of our total population, and their countless contributions range from art, innovation, politics, business, and so on. We celebrate Cesar Chavez, who helped farm workers organize and protest for better working conditions. We celebrate Ellen Ochoa, the first Latina astronaut to go to space; Antonia Novella, the first Latina Surgeon General; Mario Molina, who won the Nobel Peace Prize in 1995 for his research on the ozone layer; and current Supreme Court Justice Sonia Sotomayor to name just a few.

In recent years, you may have heard or seen the terms Latina, Latine, Latino, or Latinx, and you may have heard pushback against the label Hispanic. As a part of my own learning and growth, I wanted to understand more about this. In her book, Making Hispanics: How Activists, Bureaucrats, and Media Created a New American, G. Cristina Mora, a sociologist at UC Berkeley, explains that quite simply, the term Hispanic was created to capture population demography for the US Census. Capturing this data is crucial because it is the basis by which we ensure fair representation to guide policy making, program funding, and so on.

The term Hispanic was created by the Ad Hoc Committee on Racial and Ethnic Definitions during the Nixon presidency. Hispanic means someone who comes from or is a descendant of a Spanish-speaking country. In the 1930s, Hispanic Americans were all marked as Mexican. For the 1970s census, census takers were asked to indicate whether they were Mexican, Puerto Rican, Cuban, Central or South American, or other Spanish. The results were unexpected. Many Whites from the US central and southern regions indicated they were from Central or South America, wreaking havoc with census results. Mora tells us that despite efforts to better identify people of Spanish descent for the 1970s census, results greatly underrepresented not only Hispanics but Whites as well. Hispanic was added to the 1980 census to collect more accurate data.

While Hispanic is still widely used, the terms Latina, Latine, Latino, and Latinx are gaining popularity. In his book, An African American and Latinx History of the United States, Paul Ortiz explains that the origin of the word Hispanic is Hispano. Hispano, or Hispana, refers to speech and culture derived from Spain. Many Spanish-speaking Americans resist this label because it truncates the rich history and culture of their Latin American ancestry – the Mayans, the Aztecs, and the Incas. Hispanic also fails to recognize the indigenous roots of many Spanish-speaking Americans. And finally, the term Hispanic does not represent Latin American countries that speak Portuguese. To address these shortcomings, the term Latino/Latina has become popular to represent the descendants of Latin American countries and, gaining ground rapidly, Latinx, which includes both Latino/a countries and Spain.

There is ongoing debate as to which term best represents Spanish-speaking Americans, and any of the mentioned terms is currently considered acceptable. Knowing what the words mean and how they represent the people they name helps us understand and appreciate the rich and complex ancestry of our Hispanic/Latino/Latina/Latinx neighbors, friends, and family.

As our country strives to create a culture of belonging and justice, taking time to learn about and celebrate our fellow Americans’ heritages, customs, and culture is important. Learning about the peoples who make up our nation gives us understanding and appreciation; from that understanding and appreciation, we can build relationships. Those relationships give us the opportunity to problem-solve together, celebrate together, and stand together!