Three Black Americans Who Made History… 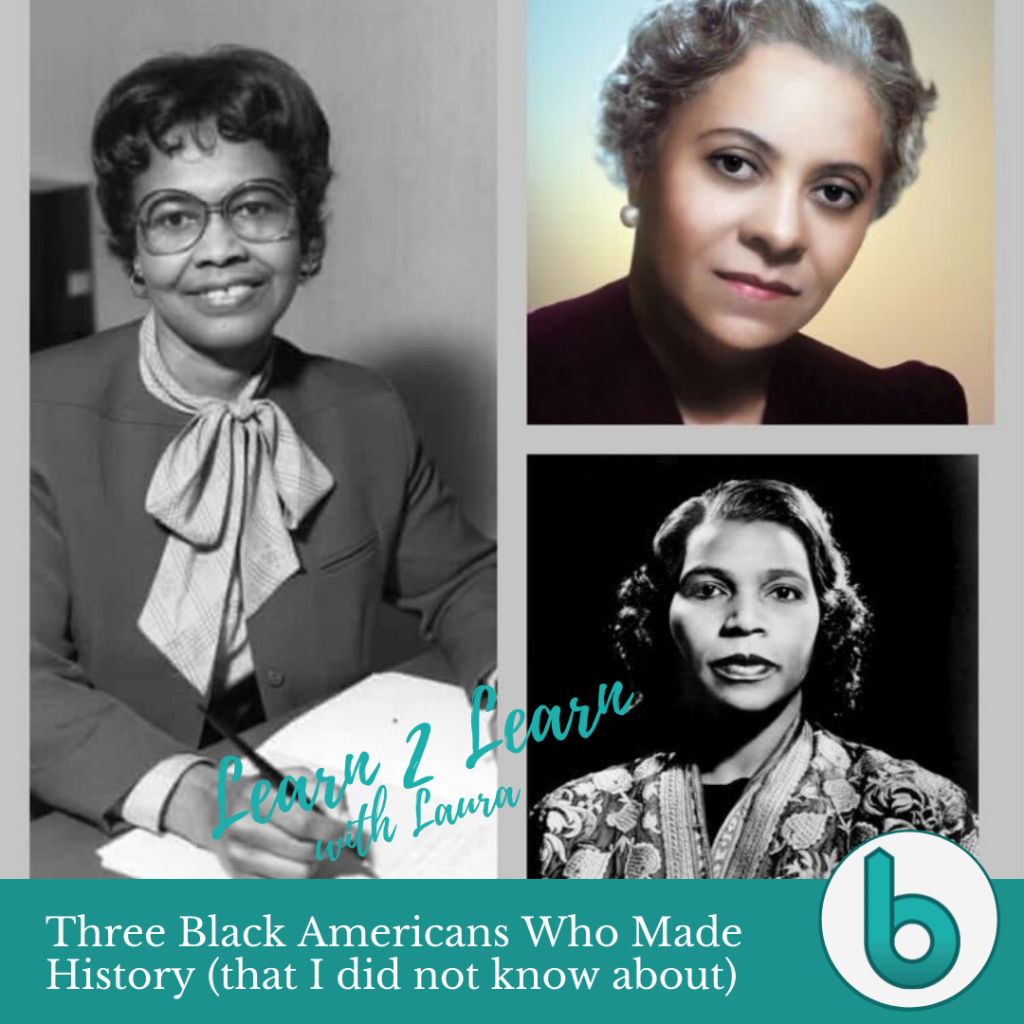 That I Did Not Know About

I’ve made an effort during Black History Month to learn about African Americans who are “new”  to me, and who have made important contributions to our country. It’s become a part of my antiracism journey, because I recognize they have not always been “seen” throughout our history, so honoring their accomplishments brings more visibility to them. Here are three Black women I discovered with amazing stories of resilience and inspiration.

Florence Beatrice Price (1887 – 1953) was born in Little Rock, Arkansas into a middle-class household. She began her astounding music career at the age of four in the Jim Crow South of the late 19th-century. At that time it was rare for any young person to pursue music, especially an African-American woman in the American South. She was taught by her talented mother after she was denied music education in the city.

In 1903, Price attended New England Conservatory to study piano, organ, and composition. She returned to Arkansas with a teaching certificate to bring music education back to her hometown. But soon racial violence in her home state prompted Price to move with her family to Chicago where her career began to flourish. She won first prize in the Wanamaker Competition with her original composition, Symphony in E minor, which caught the attention of Chicago Symphony Orchestra Music Director Frederick Stock. Her piece was premiered by the Orchestra in 1933 with The Chicago Daily News reporting “It is a faultless work, a work that speaks its own message with restraint and yet with passion…worthy of a place in the regular symphonic repertory.”

Price went on to have a prolific career, writing dozens of orchestral, vocal, instrumental, and chamber works, with a musical style that was not only influenced by European composers such as Dvořák and Coleridge-Taylor, but also by American Negro spirituals and vernacular dances. The 1933 Chicago Symphony Orchestra premiere of Florence Price’s Symphony No. 1 in E minor marked the first time a major American orchestra had performed a piece written by an African-American woman. Musicologist Douglas Shadle, one of the nation’s top authorities on Florence Beatrice Price, said this:

I hear Price’s Symphony in E Minor as a stand against the turmoil surrounding her life in the 1890s. To my ears, Price’s symphony proves that African-American vernacular idioms from before the Civil War could find a musical home in the standard framework of the symphony—it just took the right person to show us it could be done.

Gladys West was born in 1930 in rural Dinwiddie County, Virginia, a community of sharecroppers. From an early age, she had ambition to go beyond farm or factory work. “I thought at first I needed to go to the city. I thought that would get me out of the country and out of the fields,” she remembers. “But then as I got more educated, went into the higher grades, I learned that education was the thing to get me out.” West graduated valedictorian from her high school, which won her a scholarship to attend Virginia State College. There, she became one of only a handful of women studying mathematics, which made her feel a bit out of place. West taught for several years after graduation, then accepted a position at the Naval Surface Warfare Center in Dahlgren, Virginia in 1956 — only the second black woman they had ever hired — analyzing data from satellites.

In those days, her work involved working out the math on paper: “We would come in and sit at our desks, and we would logic away, go through all the steps anyone would have to do to solve the mathematical problem.” But when computers came on the scene, it meant learning how to program — and being ready to catch the computers’ mistakes. “Nine times out of 10 they weren’t completely right,” she recalls, “so you had to analyze them and find out what was different to what you expected.” West was involved in an award-winning astronomical study in the early 1960s that showed how Pluto moved relative to Neptune, and her department head recommended her for a new role as project manager for the Seasat radar altimetry project, involving the first Earth-orbiting satellite that could remotely sense oceans.

This led to her greatest accomplishment — the creation of an extremely detailed geodetic model of the Earth which became the foundation for the Global Positioning System. Although GPS is ubiquitous today, West says that in the moment, she wasn’t thinking about the future. “When you’re working every day, you’re not thinking, ‘What impact is this going to have on the world?’ You’re thinking, ‘I’ve got to get this right.'”

She pursued her PhD in retirement, and in 2018 she was awarded a doctorate from Virginia Tech; that year she was also inducted into the U.S. Air Force’s Hall of Fame in a Pentagon ceremony in her honor. Gladys West is truly another “Hidden Figure.”

Marian Anderson (b. 1897) was just six years old when she became a choir member at the Union Baptist Church in her hometown of Philadelphia, where they nicknamed her “Baby Contralto.” Her father was a coal and ice dealer and was supportive of her musical interests. When she was eight, he bought her a piano. Since the family couldn’t afford lessons, she taught herself.

The church choir was so impressed by Anderson’s talent and motivation that the members of the congregation got together and raised money for her to study with a respected voice teacher. While she was studying, she entered a contest organized by the New York Philharmonic Society and won the chance to sing at Lewisohn Stadium in New York.

In 1928 Anderson performed at Carnegie Hall for the first time, and eventually she received a scholarship that took her to Europe. By the late 1930s, she was well known on both sides of the Atlantic. When she was invited by President Roosevelt and his wife Eleanor to perform at the White House in 1936, she became the first African American to receive this honor. Most notably, in 1939 her manager tried to arrange a performance for her at Constitution Hall in Washington, D.C. The owners of the hall, the Daughters of the American Revolution, told Anderson and her manager that no dates were available. The real reason for turning Anderson away, however, was a policy established by the D.A.R. that restricted use of the hall to white performers. When word got out, there was a public uproar, led in part by Eleanor Roosevelt, who resigned from the D.A.R. in protest. The First Lady invited Anderson to perform instead at the Lincoln Memorial on Easter Sunday. In front of a crowd of more than 75,000, Anderson gave a moving performance that was broadcast live to millions of radio listeners.

Affectionately known to audiences as “The Lady from Philadelphia,” “The People’s Princess,” and “The Voice of the Century,” the contralto died in 1993. Racism shadowed every part of her life, but she is credited with breaking down barriers for African Americans in the arts, and galvanizing a fledgling civil rights movement with the 1939 concert at the Lincoln Memorial in Washington in a brave protest against racial intolerance.

In 1955, Marian Anderson became the first African-American to make her debut at the Metropolitan Opera. She would often perform for Kings and Queens in Europe, then she would come back home to her own country and have to sit in the back of the train. In response, “she stood flat-footed and she sang.” The power of her voice defied the conscience of Jim Crow America. From the PBS Voice of Freedom documentary, “The year that began with Anderson’s Met debut ended with the emergence of 26-year-old Reverend Martin Luther King Jr. onto the national scene. The torch was being passed into the Civil Rights Era.”