Setting the Thanksgiving Table for Common Memory with Native Americans 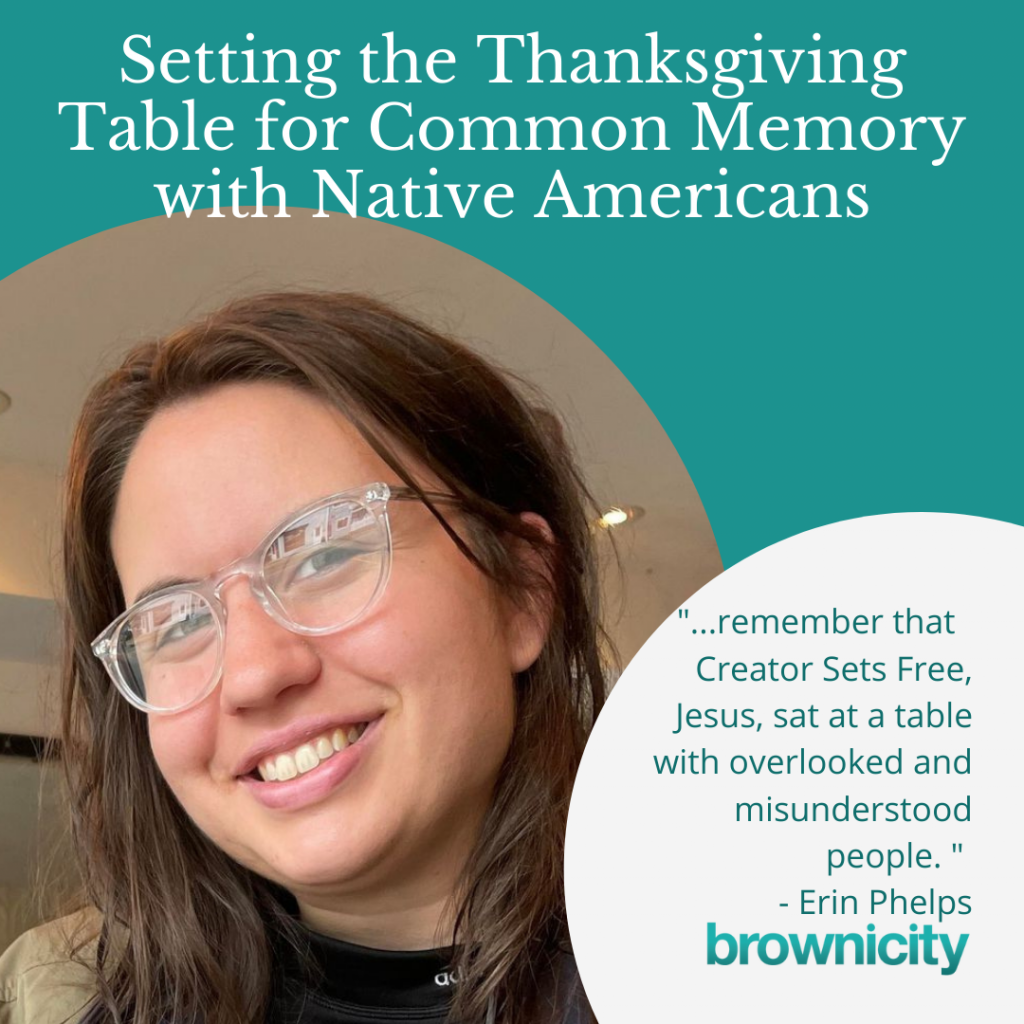 A common phrase when meeting another Lumbee is to ask “Who’s ya peoples?”– as a way to reinforce a bond that goes beyond federal decrees and permissions about who is Native and who is not. This question reinforces a bond known as kinship — a common practice when considering who is included and who is a relative. If you are part of a Native’s family, you are part of a Native’s family, regardless of what 23andMe may report.

Over the past three years, I have been reconnecting with my own heritage and culture as someone who is a host of European ancestry and original peoples. It’s not that I haven’t known that I was Native, but I found myself muting that living part of myself due to the perception of peers around me. Since reconnecting, I have felt more full, more alive, and more in tune with how God, Creator, has made me. My ancestors are gone, but the legacy lives on through the revitalization of practices, joining pow wows and other gatherings, not to mention, gathering with my “peoples.”

“Where common memory is lacking, where people do not share in the same past, there can be no real community. Where community is to be formed, common memory must be created.”

This is a quote from Georges Erasmus, a Dene man from Canada. In recent years, the idea of a land setting or land acknowledgement has become more popular and incorporated in the public sphere. Land acknowledgments have since become the focal point of immense criticism, and on the very opposite end of the spectrum, an organizational triumph for inclusion and diversity. Some question the point of land acknowledgements. Some criticise them for being too ceremonial.

Land setting highlights the kinship that indigenous people have with the land. While a land acknowledgment will never repair what has been disrupted, it helps those on the outside think of the legacy of the peoples on this land. Land setting can provide a space for residents of an area to foster a common memory. The indigenous people in the Americas took care of the land and knew the land, and at times, the settlers and colonizers benefited from their relationship with the land.

I have recently had the pleasure of acknowledging the people whose land Charlotte, NC inhabitants dwell. Please note that the acknowledgement is written in a way that reflects on past consequences and current revitalization. There were several tribes that inhabited this area, including but not limited to the Sugaree, Waxhaw, Saura (Cheraw) and several tribes from the Siouan language family — the same language family from some of my ancestors. It is said that who we know as the Catawba are descendents from about 30 tribes that came together after war and disease due to colonial contact. As an aside, I cannot wait to hear these languages, including those of my peoples, around the throne before the Lamb.

Let’s strive to create a common memory together, starting with this land setting for my context:

“In solidarity as an Indigenous person, we would like to begin by acknowledging that the land on which we gather is the original territory of the yeh is-WEH h’reh, the people of the water, also known as the Catawba. Creator gave the yeh is-WEH h’reh this land to steward, yet were interrupted by the English, who eventually wanted the land for themselves. We thank them for their strength and resilience in protecting this land and the revitalization of once-lost traditions. I inquire of you, a resident of a colonial-state, to hold space for a people who was, is, and will be. I inquire of you to elevate Native voices in all spaces. As a reminder, you are on Native land.”

Common memory and kinship are not ideas that are specific just to a Native context. Look to your left, look to your right. Who do you hear? Who is missing in your circle? Whose stories are left untold? For a community to form, there must be context and understanding where one comes from. For that, the whole community must be present.

As you gather around your tables this holiday season, remember that Creator Sets Free, Jesus, sat at a table with overlooked and misunderstood people. He has woven people together that share no kin besides Him at the center. Let us be like our Brother, our kin, our Table setter.

Mark Charles on being Native in the United States

Lean more about the original stewards

Erin Phelps is an educator in Charlotte, North Carolina. She is a part of two state-recognized tribes that dwell in Southeastern North Carolina — the Lumbee and the Waccamaw Siouan. She grew up in Leland, left the coast for the piedmont region, and graduated from Wingate University in 2016. Erin has taught English in various contexts, including two Cambodian universities, the YMCA, Central Piedmont Community College, and even her students’ homes. She is an active member of Christ Central Church in Plaza Midwood. Her research interests include Teacher Bias in the English Language Classroom, Decentering Whiteness while embracing Ancestry, and Multiracial Identity Development.