Reconnection and Renewal: A Pilgrimage 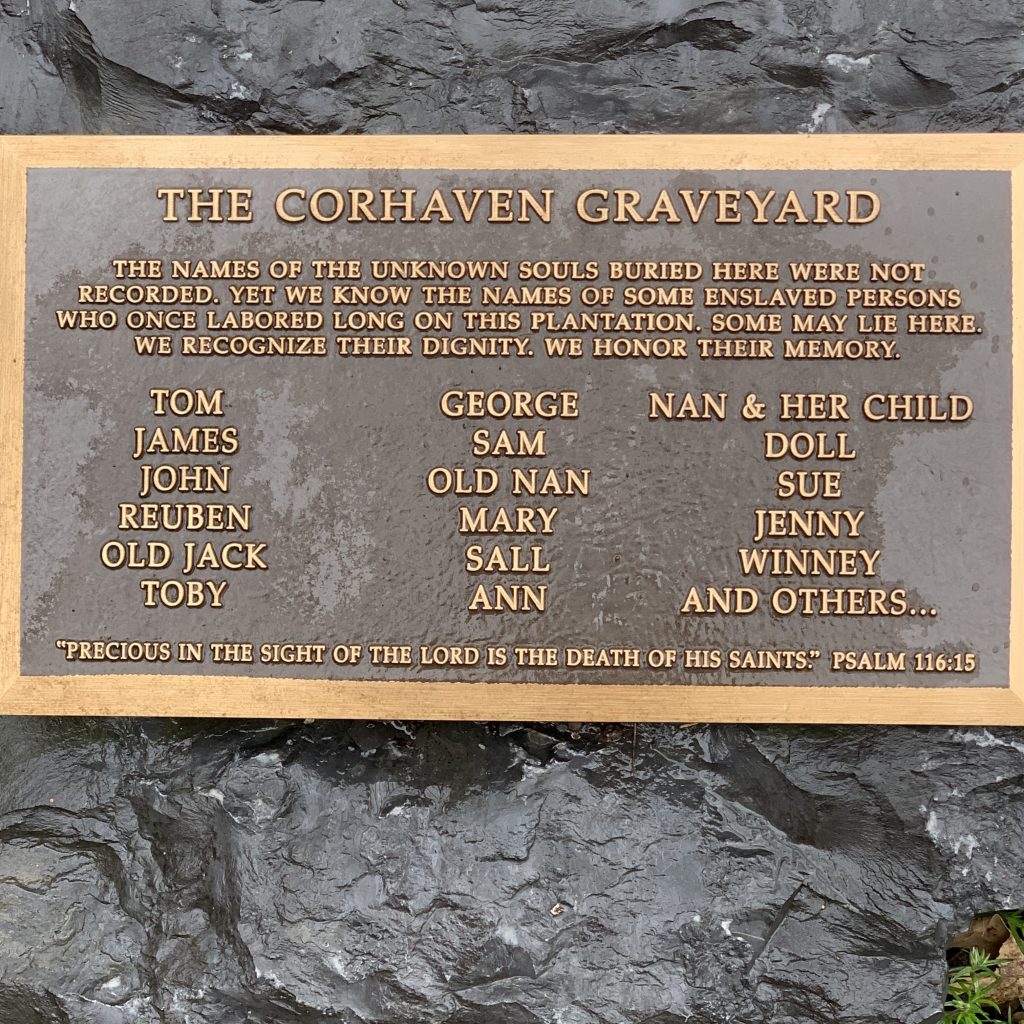 I came to the Virginia in Slavery Pilgrimage on Palm Sunday weekend feeling hurting but hopeful, exacerbated yet expectant. The weekend marked the end of the sixth week of the seven-week An American Lent devotional by the Repentance Project.  By this time my emotions were raw and real.  Daily reading about the intentional, pervasive ways Blacks have been systematically dehumanized in America was gut wrenching, heart-breaking, and at times overwhelming.  It felt as if a keloid scar on a wound was being reopened.  These types of scars develop because the wounds cut deeply, are left untreated, and heal improperly—much like racism in America.

I now understand why America often references Germany and South Africa as examples of racism and ethnic hatred. It so much easier to look through a window than in the mirror.  But look in the mirror we must.  We can never properly heal from the scars of racism when we refuse to face the roots of racism. Like the wounds they inflict, the roots run deep.

If reading about American slavery was looking in the mirror, this Pilgrimage would be stepping into the mirror.  Now I’d be walking the paths where some of the most atrocious, heinous acts in history took place.  All with the realization that these acts were done legally and with the blessings of the American Christian Church. Acts done to my African ancestors. Acts done by my English ancestors.  Acts often done in the name of the Christ I serve – this, I lament the most.

Years back, I traced my paternal ancestors to the Virginia area.  Solomon Cabell, my great great grandfather born around 1836, was the last person I was able to find.  I’d also received DNA results showing heritage from Benin, W. Africa and England.  Knowing Beninians were brought to Alexandria and the English Cabells helped colonize Virginia, this Pilgrimage would connect the dots for me personally. I wouldn’t be walking the path of nameless, faceless Africans or Virginians.  These people were my people. Enslaved and enslavers.  Few records of Black Cabells, plentiful records of white Cabells documenting their commitment to and wealth from the institution of slavery.

I wondered what would my emotions be – anger, sadness, fury, hurt?  After visiting the oldest church in Alexandria, I had my answer- all of the above. To know a church was built partly by enslaved labor, attended at times by George Washington and Robert E. Lee while Blacks, if allowed at all, had to sit in the back was too much to handle.  My emotions quickly went from raw to really raw. So, about an hour into the Pilgrimage, I begged the Lord to show Himself to me in the ugliness of this history. My history.

Alexandria showed a different aspect of slavery to me – urban. Blacks in the domestic slave trade were sold for up to $800 dollar per person and deported further south. As an estimated 100,000 indigenous peoples walked the Trail of Tears, approximately 450,000 enslaved Blacks were bought, sold and often forced to walk the 1200 plus miles to Natchez, Mississippi.  It’s hard to image that in some cases, 50% of a white family’s wealth came from owning enslaved Blacks.  And at one time, over 50% of the revenue in Richmond was connected to the institution of slavery. Wealth creation for white image bearers on the backs of Black image bearers. Unconscionable. Deplorable. Legal. For the love of money is a root of all kinds of evil. (1 Timothy 6:10a)

We heard about enslaved Blacks who slept on the hard-wood floor at Carlyle house. We saw chains and names of enslaved Blacks held in the slave pen. Words can’t describe the deep, deep, grief I was feeling.  God in His mercy, met me. I saw Him in the story of a white Quaker who owned an apothecary.  His income, derived from supplying medicine to those injured in the Civil War, went to purchase enslaved Blacks.  Not for free labor but for manumission. He did for the enslaved what they could not do for themselves.  At great personal cost, he sacrificially paid the price and set them free.  He lived out the gospel of Christ in the cultural context of his day. 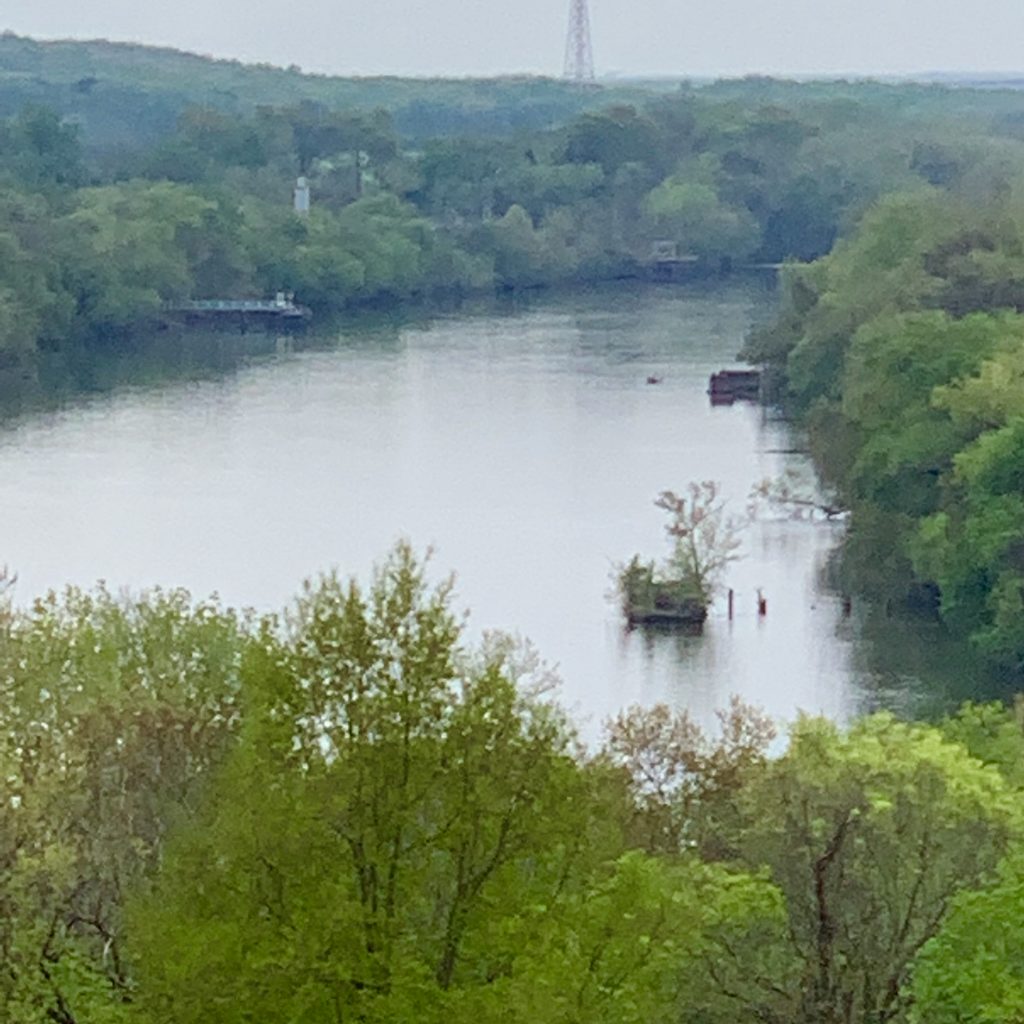 In Richmond, we faced the James River where my people were brought from our native land – four hundred years ago this year to be exact. I listened to how they were brought off the ship at night, as not to upset or offend white women and children. Keep the mistreatment of these Black people hidden so the white beneficiaries from their labor won’t be offended. That same tactic is seen today.  Don’t talk about systemic racism and its present effects.  Just preach the gospel.  America doesn’t want the beneficiaries of systemic racism to be offended. 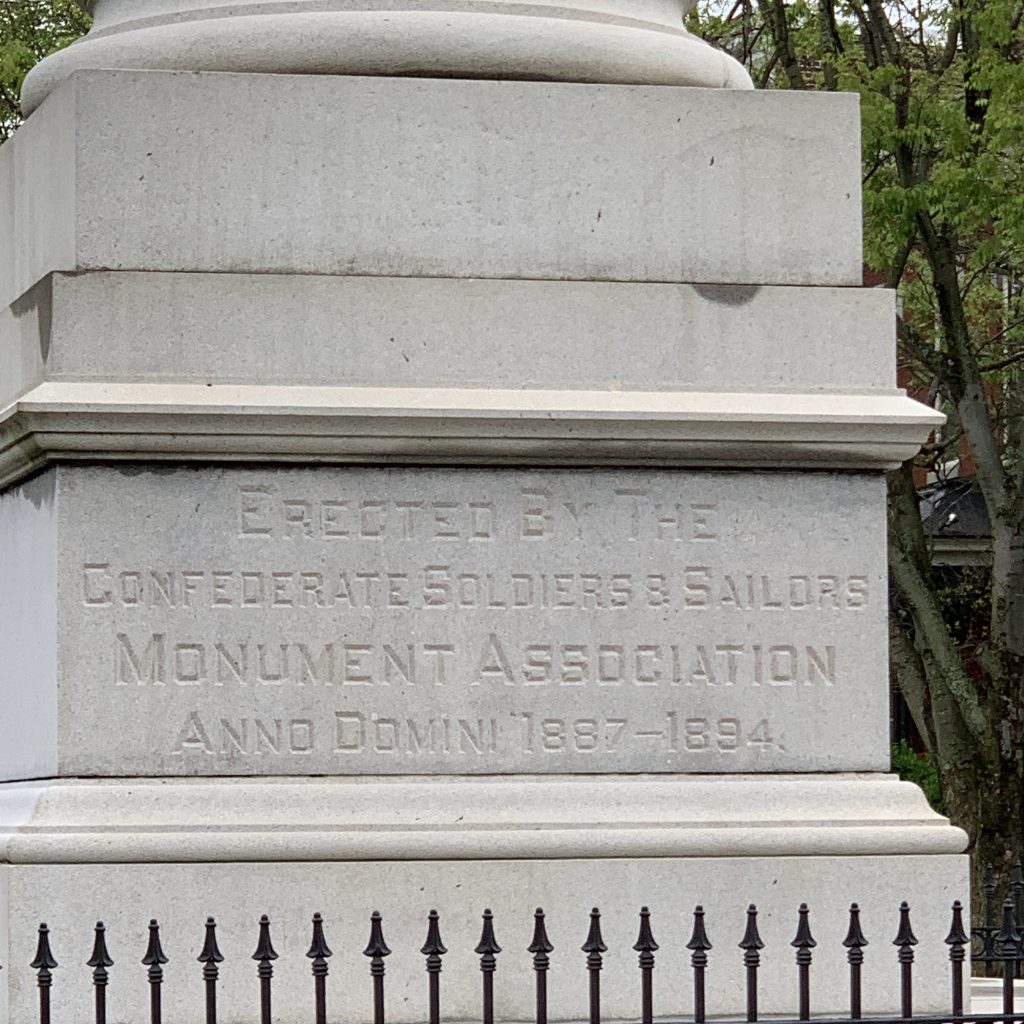 We walked a trail the enslaved Africans may have taken, with the statue commemorating fallen Confederate soldiers in sight. One of our guides, Reverend Tee who is Black, gave us a different perspective of the statue.  Fathers, sons, brothers and friends died in the Civil War. The statue could be an attempt to honor the lives of their fallen.  This pain was as much a part of southern white’s sacred story as the pain from slavery is a part of mine.  He challenged Christians to understand, which is different than validating, the sacred stories of others. His challenge is hard but necessary work if we hope to bring about true reconciliation.  I have to confess, I’m still grieved by which sacred stories are considered worthy of public honor. The harsh truth is, those who fought to keep Blacks enslaved are counted worthy.  Indigenous peoples and enslaved Blacks are not.

Hearing Reverend Tee, also with roots in Benin, speak about the disconnection of Blacks from the spirit of this land, deeply resonated with me.  Why would we feel anything else after years of inhumane treatment? Living unwanted and undervalued is a part of our collective sacred story. Listening to Reverend Tee’s journey to Benin increased my longing to reconnect with what was stolen – the sense of belonging, value, and worth.  I loved hearing about the experiences he had with the land and people. I may never travel to Benin, but I don’t believe it was coincidence he and I share similar ancestral roots. God showed Himself as Reverend Tee faced history honestly, with a heart toward true reconciliation.

Then there was the visit to Monticello. I can only describe of a spirit of unrest as I walked onto the property of Thomas Jefferson.  I walked through the home, listened to his glowing accolades and toured the well-kept gardens. Yet my mind continually went to the 607 enslaved Blacks.  How many people did it take to maintain the eleven-thousand square foot house and his other properties?  Was it really architectural brilliance to design a home where those who labored for his happiness were virtually unseen?  Should I ignore the fact that he sexually exploited and impregnated teen-aged Sally Hemings, all because he wrote the Declaration of Independence? I was extremely thankful when the tour ended.  I can only describe Monticello’s grandeur at the expense of the enslaved Blacks as vulgar.  I don’t think I’ll ever step foot on a commemorated plantation again.  It’s as if my spirit knew there was nothing but sorrow for my people there.

After Monticello I wasn’t sure what to expect at the Corhaven, the graveyard of unknown enslaved Blacks. Or how I’d feel.  At the beginning of this journey I’d read its history, and the miraculous ways God affirmed its purpose and that of the Repentance Project.  Yet those buried on the property could be some of my unknown ancestors. As I walked to the site I was struck by the beauty, simplicity and evident care given.  Whereas I could find no beauty at Monticello, for me this small yet well-tended graveyard radiated with it.  At Monticello I felt unease, at Corhaven I felt peace.  As the last of our group entered the gravesite, the forecasted rain finally fell.  In the rain we walked, prayed, and honored in death those who were dishonored in life.

During this time we sang Amazing Grace, written by a former slave ship captain. Listening to the reflections of this multiethnic group who journeyed with me, gave me great hope.  As the rains continue to fall and Rev. Haley led us in a Palm Sunday service, the Lord met me again in a sweet, gentle way.  Not in the ugliness of this history, but this time in its beauty. In a still, small voice He reminded me that He is El-Roi, the God who sees me.  My brown skin is less valuable in America. True. But not to God.  Never to God.

For me this Palm Sunday weekend wasn’t an awakening, but a reckoning of what I’ve always known. Black lives have never mattered equally in America. Thomas Jefferson’s infamous statement, All men are created equal, was never meant to include Black people like me. The thoughts he put to pen make this painfully clear.

But El-Roi sees me. And has always heard the cries of my people.  I don’t have to know who was buried at Corhaven. The God who sees me knows.  It was no coincidence this land was purchased after all these years by a man who cared enough to act; or that the rain that started when we entered the gravesite stopped as our worship ended.  God is doing a new thing, a renewing of the heart, in those who visit. I believe He is using nature to affirm it.

As I write this, Easter Sunday, An American Lent devotional ends.  Today, Rev. Haley challenged the readers – What is God calling us to do in light of the last 47-day journey? Palm Sunday weekend I saw what the fruit of repentance looks like.  Visible, sacrificial actions done in the cultural context of our day. Living out the gospel in multiethnic community. I also saw the fruit of reconciliation. Sitting with sacred stories, though they may cause me great pain. Leaning in rather than moving away.  Walking in the healing power of forgiveness.

What is God calling me to do in light of the last 47- day journey?  Continue my part in the hard work of racial healing. Follow His path of forgiveness and humility. See people as He sees them. Look for Him in the ugliness and beauty of my history.  And to remember, He is , the God who sees me.

Karen,a native of Kentucky, now lives in the Charlotte, North Carolina area with her husband and three active sons. She is passionate about God’s word and has spent time equipping the Church through organizations such as Bible Study Fellowship International and Brownicity.  In April 2017, she joined Proverbs 31 Ministries as the Human Resources Manager.  When she’s not working, teaching, or writing for the First 5 app, you’ll find her uncovering overlooked jewels at the local thrift store.