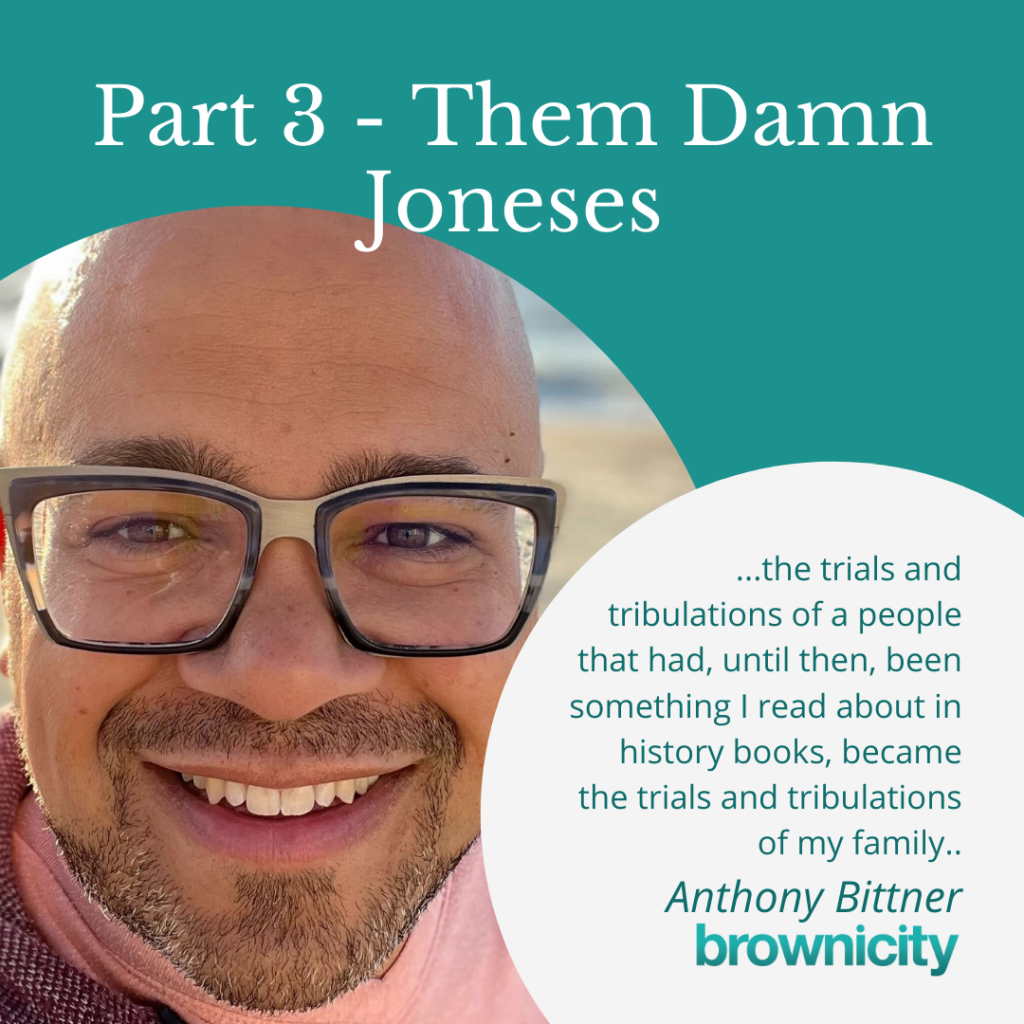 “Hi. How are you? Is your mother’s name Roxann? Are you originally from Saginaw?  I’m writing because I am looking for an Anthony Todd Bittner.”

That’s the message I got from an unfamiliar sender on a Tuesday morning in July of 2013.  And that was the day I’d begin a journey that would reconnect me with my father’s side of my family tree; a journey that would eventually connect me with my Blackness – a connection that, as a child of mixed race that grew up with my all-white family in an almost entirely white rural town, had been painfully absent.

The sender turned out to be my cousin, Daphne – the niece of my biological father, Victor Jones.  I hadn’t seen any of the Jones family since I was in diapers, 35 years prior, but once she and I began exchanging messages, she shared that every now and then, stories of my existence were told among the family.  She got curious, did some internet sleuthing, and tracked me down.  Daphne was the person who let me know I had 6 siblings that I either never knew or didn’t remember.  She let me know that like me, the Joneses were a very musically inclined family.  She let me know that many of the Joneses were still in Saginaw, MI (where the Bittner family is largely based), that a fair number were in Chicago (where I had spent a majority of my adulthood), and that my father, sister, and her 3 kids had recently relocated from Saginaw to Las Vegas).

In the months that followed, I met my oldest sister, Sheri, and we bonded immediately.  I learned more about the other Jones siblings and looked forward to meeting them, but I avoided the repeated calls and messages from my father.  That was an emotional space I didn’t think I was prepared for.  Then came the reunion…

In August of the following year, I was passing by Saginaw en route to the east coast of Michigan.  It just so happened to be the same day as the annual Jones Family Reunion.  I called my sister, Sheri, who had made the trek from Vegas for the reunion.  I had no intention of making a stop in town, but Sheri has what some would say is a very convincing way about her.  I would say, to her and anyone else, that she’s plain old pushy!

After a bit of negotiating, I agreed to stop in the parking lot of the event space.  It would just be Sheri, it would just be a brief hug.  I decided that I needed social and emotional reinforcements in case this detour became something bigger than my sister had promised, so I made a pit stop to pick up my cousin and close friend, Jessica.  No sooner was she in my car that my phone rang.

“Your niece Erica is here.  I told her you were stopping by, and she wants to come out and meet you.”

Jess and I pulled into the parking lot.  I sent a text to my sister asking her to come on out – with nobody but her daughter.  And so she did.  It was great to see Sheri again.  It was great to meet my sweet niece.  But almost immediately, Sheri began convincing me that I needed to meet my brother DeJaun and his two adorable daughters.  I looked to Jessica for counsel, and she immediately gave me a “don’t look at me, this is all you!” kind of look.  I gave in.

I immediately recognized my brother by the giant bald head that mirrored my own.  In an instant, I fell in love with his twin toddlers.  But before I could even soak it all in, Sheri hit me with, “you know…if Daddy knew you were here and we didn’t tell him until after, he’d never forgive any of us.  Please let me bring him out.”  There was an entirely too long moment of wide eyes and silence, but I gave in.

He, too, was recognizable by the same bald head that my brother and I shared. He knew who I was in an instant, without being told, and he just smiled.  We shook hands, we talked about meaningless things for a few minutes.  The experience was quiet and calm with no big swell of emotion.  It was the opposite of everything that Oprah taught me to expect in this moment, and that was a relief.

My father, who had clearly taught Sheri everything he knows, began convincing me to come in and meet the entire ballroom full of Joneses.  “It’d be a shame if all these people who have come from all over the place didn’t get a chance to meet the boy they’ve heard so much about.”  I could have easily vomited at the notion.  I didn’t.  But I did give in.

Stomach in my throat, and heart trying desperately to escape my chest, I walked in with Jessica, my new older brother, and the father I hadn’t seen since before I could walk (Sheri and Erica had abandoned me almost as soon as my father got outside because they heard their song being played by the DJ inside).  There was a sea of black and brown people and I was in the middle of them – a social experience I hadn’t encountered on this scale in my almost 40 years of life.  It felt like all eyes were on me.  “Uh oh.  They know I’m not really Black,” I thought to myself.  But it soon became clear that with my brother on one side and my father’s beaming smile, his arm around me on the other, these people knew exactly who I was without a single word being said.  The very first person I remember “meeting” was an uncle.  He walked right up to us, shook his head, and said, “them damn Joneses and they big ass bald heads.” Then he walked away before any of us could say a single thing in response.  That was followed by a series of quick introductions and pleasantries.  My insides had calmed down, my guard was no longer up.

Then I saw the family wall – a wall of photos chronicling the history of the family.  It was simple, but beautiful.  I slowly walked along, stopping to examine each photo.  There were recent photos and photos from the last few decades of course, but there were also photos from the Civil Rights Era, there were photos of children standing in cotton fields decades before that.  I had grown up with an appreciation and respect for a Black history filled with so much pain, yet so much joy. But because of my life experience as the only brown kid in a white family, I never felt all that connected to it.  As I continued along the wall, the trials and tribulations of a people that had, until then, been something I read about in history books, became the trials and tribulations of my family.  The photos of celebration and rebellious joy were of a people whose blood I share.  Queue the previously anticipated swell of emotions.  It wasn’t absent from my long lost reunification, it was simply delayed – waiting for the perfect trigger.  I kept it together to save myself from embarrassment.  I’d save the tears for solitude and reflection at a later date.

I left about an hour later with a promise to keep in touch and a promise that that would not be the last Jones Family Reunion I attended – promises that have since been kept.  I’ve made subsequent promises to myself; promises to meet my other siblings; promises to get deeply familiar with my new family and our history; promises to engage in the Black community through education, volunteerism, advocacy, and activism – promises that are now active and ongoing.

Anthony ‘Tony’ Bittner is a musician, storyteller, and activist who recently relocated to Charlotte, North Carolina from Chicago, Illinois. He is passionate about social justice and DEI in both his personal and professional lives. Tony strives to use his art to entertain, educate, and inspire.