Origins Part 2 – To Be the Change 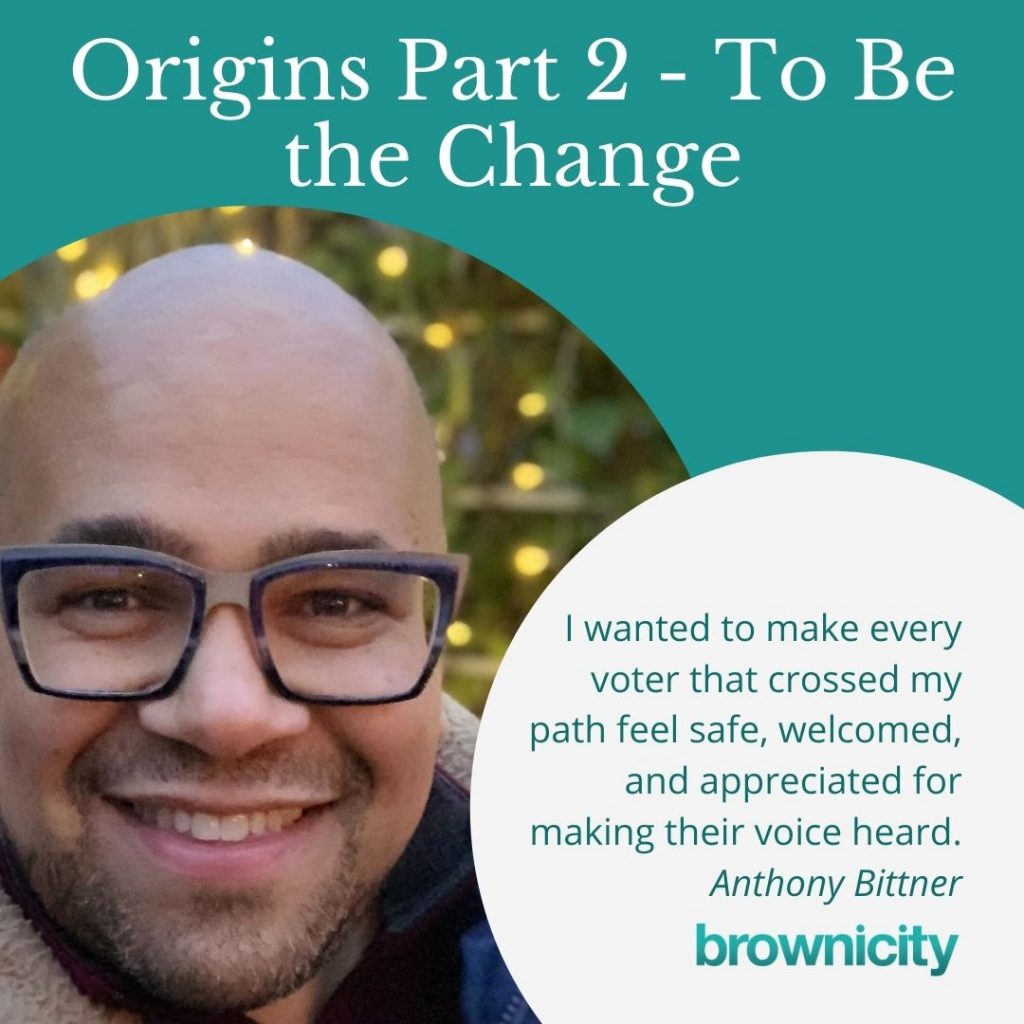 It wasn’t long after those first bits of exposure to the beauty of Blackness that I began to explore the world of policy and politics.  Prior to then, I was in no way politically or socially aware.  I didn’t really have my own thoughts regarding the issues or the parties.  I grew up in a family that both idolized JFK and adored Ronald Reagan, and so…I fell in line and did the same.

But in the same span of time that I was becoming more acquainted with my Blackness, I was also spending much of my time within my university’s school of music and the theatre department.  I was collaborating with folks that had experiences and backgrounds that were exponentially more varied than those I grew up with. I was socializing with people who openly expressed their sexuality and embraced queerness; people who had strong feelings about poverty, about social justice, about environmental justice.  For the first time, I was having conversations with folks who encouraged me to reflect on my own thoughts and feelings versus blindly attaching myself to those I had inherited.  These were people that respected, loved, and celebrated one another, no matter their differences.  These were my people.

It was because of those friends and conversations that I grew more interested and involved in politics.  My lens began to focus in on issues of environmental and social justice.  I invested my time in advocacy, activism, and volunteerism.  I was working phone banks and knocking on doors.  I was cleaning up parks and donating money.  I was mentoring underserved youth and helping to educate adults about diversity, equity, and inclusion.  I felt passionate about the work I was doing, but I often struggled with the feeling that my efforts weren’t making a significant impact.

A few years later, the presidential candidacy of Barack Obama changed the game for me.  His campaign engaged my brain, my heart, and my soul in a way that I didn’t know politics could.  I was in Grant Park on election night, and it felt like the world changed when the race was called.  His election represented the large-scale change that I wasn’t sure was possible but wasn’t sure was impossible.

Over time, my evolution as a Black man had progressed exponentially.  After 37 years of not knowing a thing about them, my father’s family found me, and we established a meaningful relationship.  I felt a true connection to my heritage.  I fully embraced Black culture.  I was filled with pride. And unlike my younger self, I knew how to identify and process my experiences with prejudiced mindsets and with the full spectrum of racism, from casual to systemic.  Those experiences and interactions didn’t just bounce off me as they had before.  They sat with me.  They helped fuel the fight in me.

The discomfort of one of those experiences had been sitting with me since the 2016 election.  I was living in a diverse neighborhood on the north side of Chicago.  The workers at my polling place, however, were not representative of the ward I was voting in.  They were mostly white, and truthfully, they were mostly helpful.  But as I waited in line to vote, I observed one election judge standing behind the poll workers that were verifying voter eligibility and handing out ballots.  I noticed that as white voters walked up to the table, he simply stood there watching.  But as several black and brown voters approached, he leaned over his colleagues and double-checked signatures and voter rolls.  It felt odd, but what did I know? I was watching from a distance, so I didn’t really know what was going on. Perhaps it was coincidence, and I was jumping to conclusions. What I did know is that I was ready to vote.  I knew I was at the right polling place; I knew my signatures would match; I knew the rules.

I approached the check-in table, gave my name and address, and I signed my name. As the poll worker began to hand me a ballot, the election judge stopped her.  He took the ballot out of her hand and put it back in the stack, then proceeded to double and triple check my signature and review the information on the voter rolls.  It was laughable to me that he thought he may have the expertise to detect a forged signature, but at the same time, I was filled with anxiety and discomfort.  I felt like I had done something wrong and was about to get in trouble or get turned away.  After a few seconds that felt like minutes, he simply said, “okay.”  The poll worker handed me a ballot for the second time, and I made my way to the voting booth.  I was out of there within 10 minutes, but it felt like too long.  I couldn’t wait to leave…I was shook.

Between then and the 2018 midterms, I spent time learning about voter suppression and voter intimidation.  It seemed to me that if someone was successful in making me – a well-educated, stubborn activist – feel like I didn’t want to go back to my polling place ever again, that it was likely a problem worth investing my time in.  So, I became an election judge.  I wanted to experience an election from the other side of the check-in table. I wanted to make every voter that crossed my path feel safe, welcomed, and appreciated for making their voice heard.  I wanted to be a part of a ground game that is capable of dramatically shifting the power dynamic in our elections.

Anthony ‘Tony’ Bittner is a musician, storyteller, and activist who recently relocated to Charlotte, North Carolina from Chicago, Illinois. He is passionate about social justice and DEI in both his personal and professional lives. Tony strives to use his art to entertain, educate, and inspire.