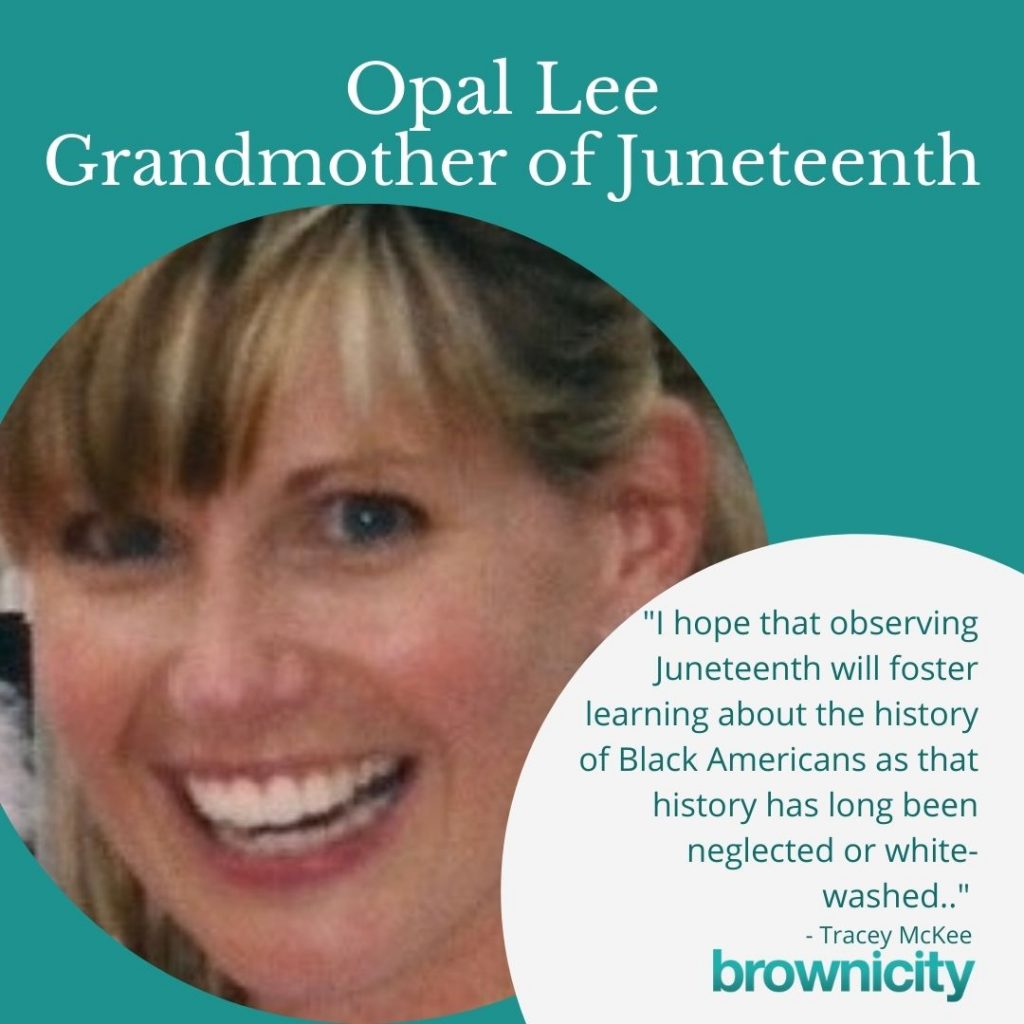 I sadly admit that I had never heard of Juneteenth until I began to see press coverage of its being made a federal holiday last summer. For those who might be unaware as well, despite the issuance of the Emancipation Proclamation on January 1, 1863, some 250,000 enslaved in Texas were unaware they were free until Union Troops arrived on June 19, 1865. Arriving in Galveston, U. S. General Gordon Granger read aloud General Orders No. 3: “The people of Texas are informed that, in accordance with a proclamation from the Executive of the United States, all slaves are free (Nix).” Juneteenth, short for June 19th, is the day that slavery was effectively ended in the United States.

Last week, I had a golden opportunity to join a live-streamed conversation with Ms. Opal Lee, known lovingly as the grandmother of Juneteenth. Lee has made headlines across the country over the past several years because of her efforts to have Juneteenth recognized as a national holiday. My daughter attends Virginia Tech, and I received an email from the Virginia Tech Office of Student Affairs that they would be hosting Ms. Lee on campus to talk with students and the community. In addition to talking about seeing her dream for Juneteenth realized, she would also be discussing her thoughts about activism and leadership. Because I might never have known about Juneteenth if it weren’t for Ms. Opal Lee, I knew I had to attend.

The first thing that struck me was that at 95 years old, Opal Lee is a force to be reckoned with. Over the hour or so that she spoke, I was amazed by her spirit, her love for others, and her determination to act rather than talk. As a young girl, Ms. Lee and her family were the victims of a hate crime. Ms. Lee’s family moved to a predominantly White neighborhood in Forth Worth, Texas, when she was a youngster. She recalled the night when a mob of angry White people showed up at her house and set it on fire. The house burned, and no one was ever held responsible. That experience helped to propel her toward a life of teaching and activism (Carmel). Remarkably, she does not believe that improving race relations in our country is a lost cause. Instead, she is driven by the belief that we can find our way to being one America (Vaughn).

Ms. Lee shared that she resolved several years ago to put on her tennis shoes and walk her way to Washington D.C. from her Fort Worth home so that she could ask then-President Barak Obama to make Juneteenth a federal holiday. She believed that as she walked, she could build awareness and support for her Juneteenth vision. Had her family and friends not dissuaded her out of concern for her health, she would have walked those 1400 miles. As a compromise, Ms. Lee organized and took part in a series of 2.5 mile walks held in various cities, including Galveston, Fort Worth, Atlanta, Milwaukee, Denver, stops in the Carolinas, and more. She chose to walk 2.5 miles in each destination to represent the two and half years the enslaved people in Texas did not know they were free. She tallied up 300 miles and collected 1.6 million signatures supporting Juneteenth being named a national holiday.

Ms. Lee told us about the Juneteenth celebrations that she attended in her community as a youngster along with family and friends. She shared that Juneteenth felt like Christmas – a time of celebration and togetherness. As an adult, Ms. Lee helped organize local Juneteenth celebrations attended by tens of thousands of people. And it isn’t just Juneteenth that she is passionate about. She has worked to establish a food bank in her community, a community garden to help feed community members in need and even written a children’s book about Juneteenth. Doing these things is a matter of fact for her; they are needed, so she works to get them done. In a world where we can fail to lose sight of the important things, she is refreshingly focused on doing things that make a qualitative difference in the lives of others.

On June 17, 2021, President Biden signed into law the resolution passed by Congress to observe Juneteenth as a national holiday. It was a day that Ms. Lee had spent blood, sweat, and tears to see come to fruition. She told KVTV in Fort Worth, “I’ve got so many different feelings all gurgling up here – I don’t know what to call them all. We’ve got all of these disparities that we’ve got to address, and I mean all of them. While we’ve got some momentum, I hope we can get some of it done. We can have one America if we try (Vaughn).”

As she wound down her talk last week at Virginia Tech, Ms. Lee took the time to emphasize to students that there is still much to do; we must address poverty and homelessness in our country as well as race relations. She encouraged students that they can make a difference, they can change peoples’ minds, and they can lead others to do great things. But, she also made clear that she isn’t stopping anytime soon!

I have continued to reflect on all that Ms. Lee shared. Despite her family having had their house set on fire by angry White people who did not want her and her family in their neighborhood, she still has love in her heart to believe that we can come together. I am so very grateful that she decided she would see to it that Juneteenth was named a federal holiday. I hope that observing Juneteenth will foster learning about the history of Black Americans as that history has long been neglected or white-washed. I hope that its observance will help create opportunities for dialogue and healing. Opal Lee believes we can be one America; I hope that we make her proud.