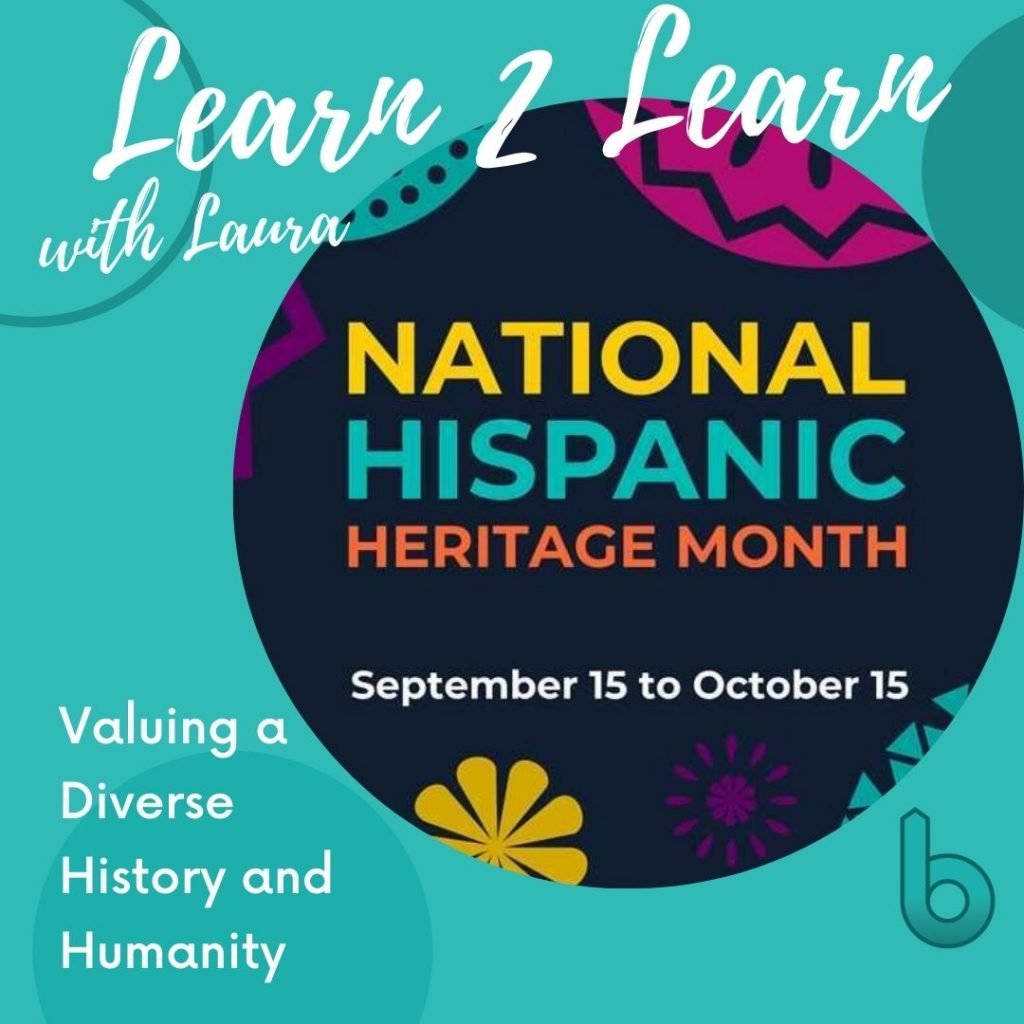 Valuing a Diverse History and Humanity

How much do you know about Hispanic/Latino history in the U.S.? I realized I didn’t know much, so I did what I always do, which is to dig in and learn. I was surprised at what I found out.

Here are just a few of the things I learned about Hispanic American history—some for the first time!

Did you know that Mexican people were living in settlements in the lands north of the Rio Grande, what is now the Southwest, before it became part of the United States?

From the Library of Congress we learn that

Mexican Americans are among both the oldest and newest inhabitants of the nation. Some Mexicans were already living in the Southern and Western regions of the North American continent centuries before the United States existed. Spanish-speaking people have lived in North America since the Spaniards established its colonies there in the sixteenth century. By 1800, Spain had governed its lands in North America, including what is now Mexico and many of the southwestern states of the U.S., for hundreds of years. Although Spaniards held positions of power, a large number of the people of this region were mestizos—people of both Spanish and indigenous heritage.

Did you know that white settlers pushed out Mexicans in their own backyard?

From this article in History.com, Why Mexican Americans Say ‘The Border Crossed Us,’ we discover how. It says:

Before Texas was a U.S. state, it was its own independent nation where both Mexicans and white immigrants were citizens. But during the nine years that the Republic of Texas existed, Mexicans became outsiders as white settlers made it more difficult for them to vote and hold onto their land. White settlers did this by targeting Mexicans with voting laws and taxes, suing for possession of their land and subjecting them to police violence. This presaged the way the U.S. would treat Mexicans in California and the New Mexico territory when it gained this land from Mexico in 1848—as foreigners who had less right to be there than the white settlers who’d moved in.

In fact, the land that had become Texas originally belonged to Mexicans who had won their independence from Spain in 1821. It had been inhabited by Native peoples and tejanos, or Texas Mexicans. Soon, anglo immigrants from the U.S. and Europe moved into Texas, bringing enslaved people of African descent with them. Texas then gained independence from Mexico through the Texas Revolution in 1836, and emerged as its own nation: the Republic of Texas.

As American citizens, tejanos faced violence from anglo vigilante groups like the Texas Rangers and struggled to maintain ownership of their land. “They essentially went broke trying to defend themselves against frivolous lawsuits contesting their claims to land ownership,”says Raúl Ramos, a history professor at the University of Houston. These practices carried over when the U.S. annexed Texas as a slave state in 1845.

Did you know that under the treaty that ended the Mexican War, the Treaty of Guadalupe Hidalgo, most of the Mexicans who lived in the new United States territories were granted U.S. citizenship?

Although Mexicans in the newly expanded U.S. were declared citizens, unfortunately, they were not always treated as citizens. This began a long history of discrimination against Latino people in the U.S.—the Mexican Americans who had previously lived side-by-side with anglo Americans. From the Library of Congress we learn:

The treaty also guaranteed their safety and property rights, “as if the [property] belonged to citizens of the U.S. according to the principles of the Constitution.” In practice, however, the new territories were far from the centers of U.S. government, and these guarantees were not reliably enforced. By the end of the 19th century, many Mexican Americans had been deprived of their land, and found themselves living unprotected in an often hostile region.

At the turn of the 20th century, the borderlands between Mexico and the U.S. were torn by political and social instability. As more immigrants crossed the border, some were preyed upon by bandits and rustlers. Once in the U.S., they had to face harsh weather, an uncertain economy, and the possibility of attacks by both longtime citizens and Native American raiders. Law enforcement was scarce, and justice was often rough and quickly executed. To make things worse, some lawmen were said to be as much of a threat to Mexican Americans as the criminals they were sent to arrest. The Texas Rangers came in for especially fierce criticism.

Did you know there’s a long history of violence against Latino Americans?

From this article, in History.com, The Brutal History of Anti-Latino Discrimination in America we learn:

As the 19th century wore on, political events in Mexico made emigration to the United States popular. This was welcome news to American employers like the Southern Pacific Railroad, which desperately needed cheap labor to help build new tracks. The railroad and other companies flouted existing immigration laws that banned importing contracted labor and sent recruiters into Mexico to convince Mexicans to emigrate.

Anti-Latino sentiment grew along with immigration. Latinos were barred entry into Anglo establishments and segregated into urban barrios in poor areas. Though Latinos were critical to the U.S. economy and often were American citizens, everything from their language to the color of their skin to their countries of origin could be used as a pretext for discrimination. Anglo-Americans treated them as a foreign underclass and perpetuated stereotypes that those who spoke Spanish were lazy, stupid and undeserving. In some cases, that prejudice turned fatal.

Mob violence against Spanish-speaking people was common in the late 19th and early 20th centuries, according to historians William D. Carrigan and Clive Webb. They estimate that the number of Latinos killed by mobs reach well into the thousands, though definitive documentation only exists for 547 cases.

Did you know that before about the 1920s, most people didn’t see the border as a problematic area, and it wasn’t always a crime to enter the U.S. without authorization?

Here’s an excerpt from How Border-Crossing Became a Crime in the United States:

“The border patrol was only established in 1924, and it’s not exclusively to deal with migrants from Mexico,” says Julia Young, a history professor at The Catholic University of America. At first, it was also concerned with alcohol and gun trafficking during Prohibition, as well as keeping out Asian immigrants who might be trying to come in through Mexico. Asian immigrants were the first group of people to be seen as “illegal” immigrants, starting with the Chinese Exclusion Act of 1882.

Most immigrants at the time were coming from southern and eastern Europe, which did not sit well with U.S. nativists and white supremacist groups like the Ku Klux Klan, who believed America should be a nation of white Anglo-Saxon Protestants. In 1924, nativist politicians passed a new Immigration Act establishing country quotas that gave enormous preference to people from northern and western Europe over those from the southern and eastern parts of the continent, while still banning almost all immigration from Asia. Nativists wanted to restrict Mexican immigration as well, especially as it increased over the 1920s as refugees from the Mexican Revolution migrated and southwestern employers sought cheap labor in the absence of Asian immigrants.

There’s so much more to the story, so please take time to look at the resources provided here to learn more about Hispanic/Latino American history.

As I read this part of Hispanic American History, I was struck by how knowing history allows us to speak into so many of the conversations we’re having in our country today. As we diligently learn history, we can contribute to conversations more productively.

The most important thing I saw was how the tentacles of white supremacy* reach far and deep. It was easy to see, just in these few articles, how the belief of superiority in the white settlers made them feel justified in their cruel behavior and treatment of Mexican Americans living around them. They continued to act on these beliefs to exploit and deny privilege to a group considered to be a different race, and to remove opportunity for land ownership and property rights to those who had been in the land generations before.

As James Baldwin says, “Not everything that is faced can be changed, but nothing can be changed until it is faced.” I’ve chosen to continue on the learning journey, even when it’s challenging and I often don’t like what I see. But we don’t need to be afraid of new knowledge! I believe that’s the only way needed change will come — once we acknowledge even painful truths, we’ll be much more motivated to do better, and be part of the change that builds toward the vision of ‘one humanity.’

Why Mexican Americans Say ‘The Border Crossed Us’ — History.com (2018)

The Brutal History of Anti-Latino Discrimination in America — History.com (2017)

Texas finally begins to grapple with its ugly history of border violence against Mexican-Americans. — Slate.com (2016)

How Border-Crossing Became a Crime in the United States — History.com (2019, updated 2020)

Beyond the Alamo: Forging Mexican Ethnicity in San Antonio, 1821-1861 (University of North Carolina Press, 2008) — Raúl A. Ramos, Associate Professor of History at University of Houston.

Migra! A History of the U.S. Border Patrol (University of California Press, 2010) — Kelly Lytle Hernández, Professor of History and African-American Studies at UCLA.

White Supremacy = An historically-based, institutionally-perpetuated system of exploitation and oppression of continents, nations, and peoples of color by white peoples and nations of the European continent, for the purpose of maintaining and defending a system of wealth, power, and privilege. (Definition by Challenging White Supremacy Workshop, San Francisco, CA)