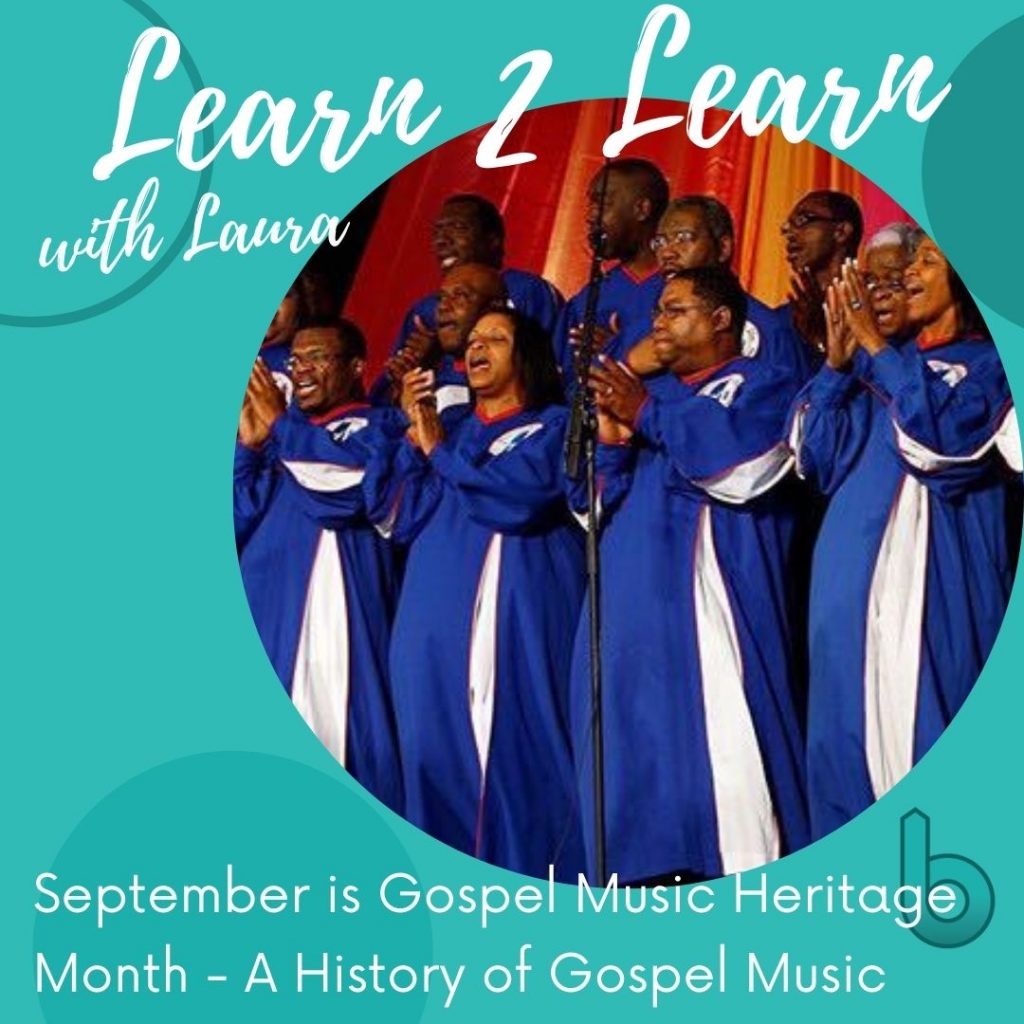 A History of Gospel Music

The history of Gospel music is a very broad topic, one that is complicated. There are different opinions about the origins of gospel music and how to define it. The dominant type of gospel is Black Gospel Music, which was traditionally believed to develop out of slavery and Negro spirituals. But many scholars now realize that much of the historical writing about slave songs comes from white writers, who we would presumably carry white perspectives, assumptions, and interpretations with them about the meanings associated with Negro spirituals and songs sung by enslaved people.

White or Southern gospel music was another type of gospel music that developed separately, out of the northeast, with similar rhythms. Historians and musicologists trace origins in various ways. Because it’s complicated and somewhat controversial, we’re providing just a few resources to get started for those interested in learning more.

In this brief history of gospel music in New World Encyclopedia, we’re told:

The relationship between the origins of white and African-American Gospel music is a matter of some controversy. Some argue that Gospel music is rooted in Africa and was brought to the Americas by slaves. However, Gospel harmonies and many of the hymns themselves also show a clear Scottish influence. Recent studies by Professor Willie Ruff, an Afro-American ethno-musicologist at Yale University, conclude that African American Gospel singing was in fact encouraged by Scottish Gaelic speaking settlers from North Uist. Thus, traditional Scottish Gaelic psalm singing, in which the psalms are called out and the congregation sings a response, may have been the earliest form of congregational singing adopted by Africans in America. Call-and-response singing, however, has also been found among many African tribes, and it is certain that the southern slave culture adapted African traditions to the Christian songs they were taught by their enslavers.

During the 1930s, Gospel music emerged from the coalescing of three types of musical activity: a) the hymn style of Charles Albert Tindley (1851-1933) a Philadelphia minister who composed hymns based on negro spirituals, adding instrumental accompaniments, improvisation and “bluesified” third and seventh intervals; b) the minimalist, solo-sung “rural Gospel” tunes that appeared as a counterpart to the rural blues; and c) the uninhibited, exuberant worship style of the Holiness-Pentecostal branch of the Christian church.

A key figure in the development of Gospel was Thomas A. Dorsey (1899-1993). Referred to today as the father of Gospel Music, Dorsey pioneered the form in Chicago. Before devoting his career to the development of Gospel, Dorsey, the son of a Georgia Baptist preacher, was a prolific blues and jazz composer and pianist. The energetic rhythms and primal growls of secular music heavily influenced Dorsey’s sacred composing style.

From its beginnings, Gospel music challenged the existing church establishment. Black religious leaders originally rejected Dorsey’s approach because of its associations with the widely frowned-upon secular music styles of the era such as ragtime, blues, and jazz.

The shift from spirituals to Gospel is evident in the recordings of African American religious songs recorded in the 1930s and 1940s. Listen to this 1941 recording of Daniel Saw the Stone by Holloway High School Quartet of Murfreesboro, Tennessee as they sang an updated version of an old spiritual arranged in four-part harmony for the gospel sound.

Thomas Dorsey teamed up with vocalist Mahalia Jackson (1912 – 1972) who, like him, had been exposed during her formative years to the Baptist church and the sounds of blues artists like Bessie Smith (through an aunt’s record collection). Together, Dorsey and Jackson bypassed the establishment and took their new Christian sound to the street corners of Chicago and elsewhere around the country. Jackson sang Dorsey’s songs while the composer hawked copies of his sheet music.

“many gospel artists began to move into mainstream secular music. Soul and R&B singers such as Little Richard, Aretha Franklin, and Sam Cooke all learned their trade in Baptist and Pentecostal gospel choirs, which laid the foundation for secular R&B and rock music. Gospel music also deeply influenced the sound of soul in the 1960s. In more recent decades, artists like Kirk Franklin and Yolanda Adams have switched back and forth between gospel and secular music, selling millions of records in the process.”

Church-centric Gospel music began to cross over into the mainstream following the release in 1969 of the recording of “O Happy Day” by the Edwin Hawkins Singers, a mixed-gender Gospel chorus based in the San Francisco Bay area. Watch this 1969 video recording of one of the most famous Gospel songs.

In the 1970s, artists like the Clark Sisters, Andrae Crouch, Edwin Hawkins, Yolanda Adams, and Kirk Franklin merged spiritual music with the popular styles of the time. Today’s gospel artists delve into new popular music styles such as hip-hop and contemporary R&B. This is often called Urban Contemporary Gospel.

This 2019 four-part radio documentary series Gospel Roots of Rock and Soul “tells the stories of gospel greats like The Dixie Hummingbirds, Sister Rosetta Tharpe, Mahalia Jackson, Sam Cooke’s ascent into the pop music world from gospel, how the song “Oh Happy Day” brought gospel music into the mainstream pop culture in the late ’60s, the influence of gospel on Al Green, Marvin Gaye, Elvis Presley, and the impact of gospel during the civil rights movement.”

While Gospel music is typically associated with the Black Church, the style is much broader and includes closely related rhythms often labeled white or Southern gospel. As described In this article from 64 Parishes, White Gospel Music:

White gospel’s origins seem to lie in a uniquely American tradition: shape-note singing, also known as sacred harp singing. The shape-note tradition uses a series of geometric shapes instead of musical notes; each shape of the scale represents a corresponding syllable: do, re, mi, fa, sol,la, and ti. Shape-note singing in the United States originated in late eighteenth-century New England as a teaching device that proved an efficient way of coordinating participants in congregational and community singing activities. Once printed texts began to appear early in the nineteenth century, the practice became especially popular in rural evangelical churches of the South. By the end of the nineteenth century, the sales of shape-note songbooks supported a thriving music book publishing industry.

The practice of various forms of white or Southern gospel as described above continue as a vibrant practice today. You can watch a sample in this 7-minute short video documentary Echos of the Past: Singing the Sacred Harp from the NC Department of Natural and Cultural Resources.

According to the same article:

In the early twentieth century, live performances featuring small groups singing the latest compositions in rich, precisely executed harmony helped further popularize the music. This practice gave rise to the earliest commercial gospel groups, many of whom were quartets. A separate but parallel market for African American quartet music also began to emerge, and performers in both genres began to influence each other stylistically.

Following World War II, the white gospel tradition seemed more aligned with country music than with two other emerging musical phenomena: the folk revival and rock ’n’ roll. Still, the folk revival’s reliance on Appalachian Mountain sounds and newer interpretations of old-time rural styles, such as bluegrass, made it easy to incorporate the long-established rural gospel repertoire. In the case of rock ’n’ roll, Black and white performers alike—from Little Richard and Ray Charles to Carl Perkins and Elvis Presley—absorbed the Pentecostal and Holiness worship practices into their own secular music.

During the early 1970s the label “Southern gospel” came to distinguish the older style from newly commercialized forms of religious music that today fall under the industry term “Contemporary Christian.” Southern gospel continues today as a traditional genre via informal networks that often include Internet communities and small-scale performances at community centers, local churches, and even campgrounds. Within this world, white gospel’s close-harmony and acoustic roots have produced a substyle informally known as Gospel Grass, which merges Southern gospel aesthetics with those of bluegrass music.

Sociologist Gerardo Martí, in his ethnographic study of multiracial congregations Worship across the Racial Divide: Religious Music and the Multiracial Congregation (2012), made these observations about the beliefs people from varying racial and ethnic groups hold regarding Black gospel music:

Gospel music is perceived to be an independent stream of music that most preserves, captures, and characterizes the Black experience. And playing gospel music (or “Negro spirituals”) in church is seen as an affirmation of the dignity and value of Black Christians.

Black music is consistently associated with the harshness of the world. Specifically, the force of African-American musical expression is believed to come from their personal and collective experience of suffering and racial oppression.

There is a deep belief in a racially-based musical authenticity that presumes only African-Americans can achieve a particular style of music. Not only is that style of music distinctive, it is actually held to be the supreme form of music for worship.

The history of Gospel music is vast and diverse. I’ve only scratched the surface!

There’s so much more of Gospel music to discover, so check out the resources below to learn more. And enjoy this recording of The Mississippi Mass Choir, singing I’m Not Tired Yet!

Worship across the Racial Divide: Religious Music and the Multiracial Congregation — by Gerardo Marti  (2012)

The Power of Black Music: Interpreting Its History from Africa to the United States — Samuel Floyd (1995)

Radio Documentary “The Gospel Roots of Rock and Soul” — 2019

The History of Gospel Music — GospelChops