Voting Rights and the Black Women Who Have Fought for Them 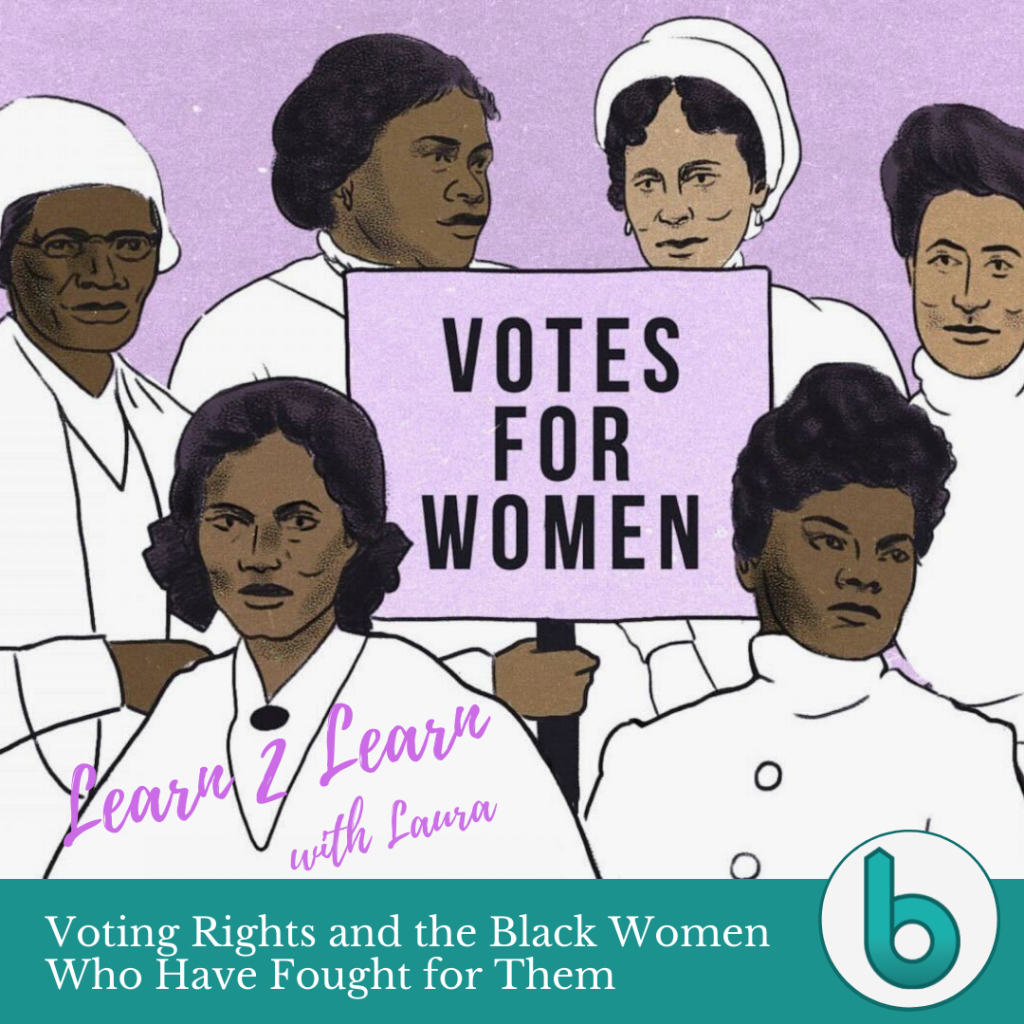 February is Black History Month, and as we reflect on the contributions that Black Americans have made throughout our history, I am inspired by the role of Black women in the voting rights movement. From Harriet Tubman to Ida B. Wells to LaTosha Brown, Black women have played a crucial role in the advancement of voting rights. The voting rights advocates of today stand on the shoulders of those who came before them, and as a collective power they are a force to be reckoned with!

I love how journalist AJ Ross says it:

“Extraordinary courage, self-sacrifice, and defiant determination are the common threads binding together a beautiful tapestry of Black women throughout history, who have tirelessly fought on the front lines of nearly every American sociopolitical movement. When you step back and admire the masterpiece these threads have composed, it’s quite clear Black women are superheroes.”

Two strong Black women. Two powerful documentary films. What I learned from them is this: White people seem to have a deep-seated fear that came out of a false narrative and that has been carried down through generations — that by giving the vote to people of color, those people would ultimately “take over the government” and “change their (white people’s) way of life.” As long as there are those who are threatened by a multiracial democracy, rather than seeing the value of it, there will be a need for strong Black women to remind us why all of our lives will be better when everyone is included.

Two women stand out to me as giants in the movement: Fannie Lou Hamer and Stacey Abrams. Though generations apart, they have many similarities. Stacey Abrams could be considered the modern-day Fannie Lou Hamer. A quick google search of their names together turns up many articles comparing these two women.

Both grew up poor in Mississippi. Both experienced racism and prejudice that propelled them to recognize the importance of voting rights. Both fiercely advocated for the poor, the marginalized, and the vulnerable. Both possessed unusual tenacity and did not back down under the weight of adversity, violence, and even terrorism. Both cared about people being able to live a decent life. Both were instrumental in creating organizations that empower the Black community to have a voice by exercising their right to vote. Both fought for voting rights that were constantly under fire of relentless voter suppression.

Both had to contend with overwhelming challenges, such as:

And both helped change the outcome of the vote in an entire state: Hamer In Mississippi and Abrams in Georgia. In the face of the struggle, Stacey Abrams said, “What am I going to do next? I’m going to do what I’ve always done. I’m going to move forward – because going backwards isn’t an option and standing still is not enough.”

Spend time reading their biographies and listening to some of their speeches and interviews. Here are a few to get you started:

Freedom Summer (American Experience, PBS, 2014) is the story of 10 memorable weeks in 1964 known as Freedom Summer, when more than 700 nearly all white student volunteers from around the country joined organizers and local African Americans in a historic effort to shatter the foundations of white supremacy in Mississippi.

Students were recruited from all over the US to come to Mississippi, which at the time was one of the nation’s most viciously racist and segregated states, to canvas neighborhoods and enlist Black Americans to register to vote. The effort was Black-led and white students had to be willing to work under their leadership and live in the homes of Black families across the state. They had to apply to come, but many were turned down by the Black leadership, in order to be sure there was as much unity of purpose as could possibly be attained.

Here’s what Rita Schwerner, a white woman who through tragedy became instrumental in the progress made that summer, wrote on her application:

“I wish to become an active participant rather than a passive onlooker. As my husband and I are in close agreement as to our philosophy and involvement in the civil rights struggle, I wish to work near him in whatever capacity I may be most useful. My hope is to someday pass on to the children we may have, a world containing more respect for the dignity and worth of all men than that world which was willed to us.”

Organized by the Student Non-Violent Coordinating Committee (SNCC), civil rights activists hoped that the participation of well-educated, middle-class students, many from prestigious universities, would not only bring results but draw the attention of the nation to the miserable standard of living suffered by blacks in Mississippi. Charlie Cobb said that in the idealism and foolishness of youth, they had no idea how dangerous it really would be. From the film:

“I don’t think people understand how violent Mississippi was. Terrorism led Black people to the obvious conclusion: if they try and vote they’re messing with white folks business and they can get hurt or killed.”

Fannie Lou Hamer was also part of this effort and had a unique public role. As they said in the film, she had Mississippi in her bones. Martin Luther King Jr. or SNCC (Student Nonviolent Coordinating Committee) or the field secretaries of the summer movement could not do what Fannie Lou Hamer did. Be sure to listen to her full testimony before the Credentials Committee at the 1964 Democratic National Convention.

I am forever changed by watching this film. It is not easy for a white person today – living in a white bubble, growing up in white evangelicalism – to understand the burden, pain, and violence of Black history and the generational Black experience. This documentary allowed me to understand and feel some of that experience. Growing up in church, I used to sing “This Little Light of Mine” in Sunday school and at church camp. It was one of my favorites. But hearing the Black community in Mississippi in 1964 sing this song – after three men had been killed in the effort just to register people to vote – gave me a completely different perspective of “shining my light.” People knew the risk, and yet they were willing to put their lives on the line to secure the right to vote. It’s about dignity and having a voice.

All In: The Fight for Democracy (Amazon Prime Video, 2020)

This film “examines the often overlooked, yet insidious issue of voter suppression in the United States. It interweaves personal experiences with current activism and historical insight to expose a problem that has corrupted our democracy from the very beginning.” As it traces the history of voting in the US, you begin to see that it was a violent history, one of terrorism. There are always people who rise up to challenge the system and fight for the right to vote for all. And the greatest moments of progress are often followed by the greatest moments of retrenchment – what we’d probably call “backlash” today.

Here are a few things I learned:

This film exposes the devious voter suppression still prevalent in our country. So much of what voting is about is whether you belong, whether you have value. It’s also about power. As Stacey Abrams said, “When elected officials feel like they may not have power anymore, they have two choices. They can either be more responsive to those they lead, or they can eliminate the people they have to answer to.” It’s both heartbreaking and infuriating how often they choose the latter.

It seems fitting to end with these words from Martha S. Jones, Professor of History at Johns Hopkins University. She says:

[N]either racism nor sexism have a rightful place in American politics. Such differences must be banished from how our nation approaches who votes, who holds office and who determines the law and policy that govern all our lives. The history of Black women and the vote is one about foremothers who set a high bar for the nation – past, present, and future. They have been a vanguard, claiming women’s voting rights and leading by holding our nation to its highest ideals.

Here are several resources that are a great beginning point to learn about some of the historical icons as well as some of our present-day activists for voting rights.

From abolitionism to women’s suffrage, Black women are the pioneers of movements | TheGrio

Vanguard: How Black Women Broke Barriers, Won the Vote, and Insisted on Equality for All by Martha S. Jones | Basic Books (2020)