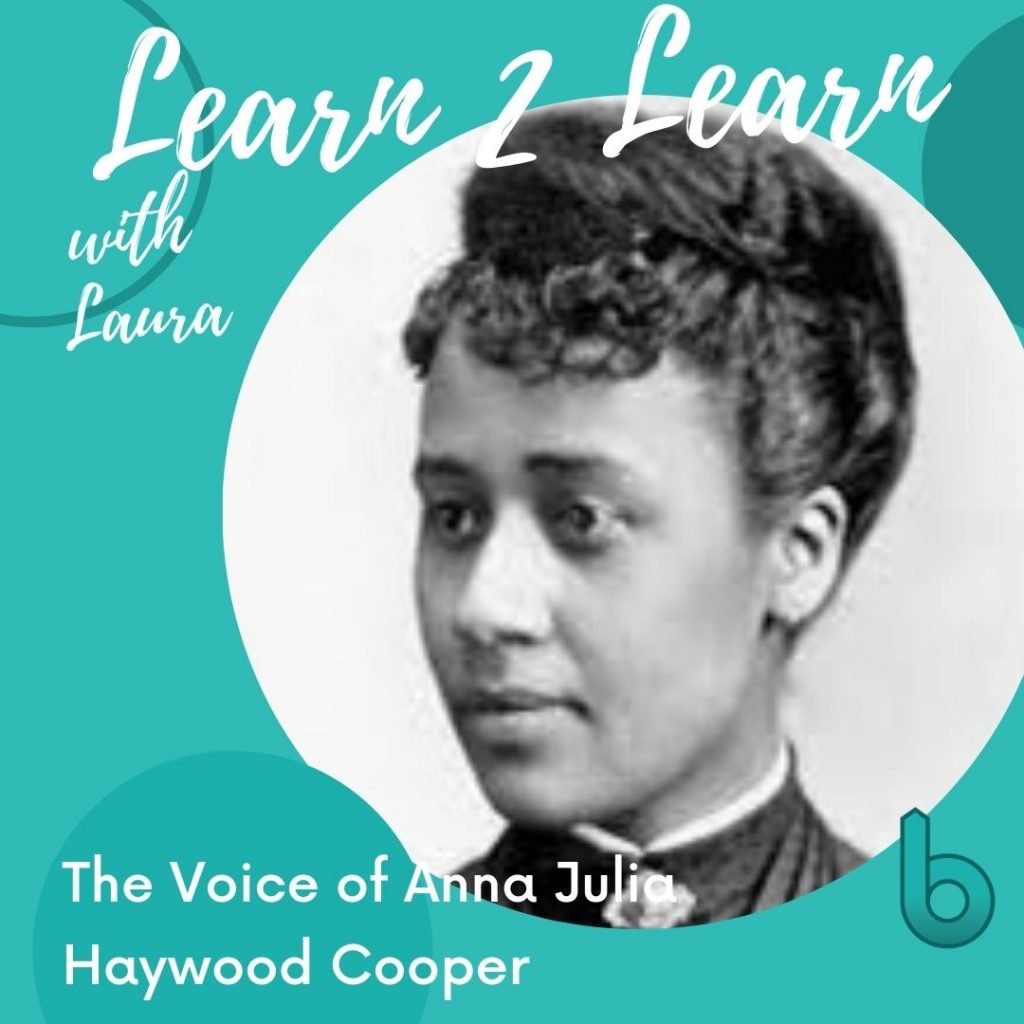 Anna Julia Haywood Cooper (August 10, 1858 – February 27, 1964) was an American author, educator, sociologist, and speaker, truly one of the most prominent African-American scholars in United States history.

Anna Julia Cooper was born in Raleigh, North Carolina to Hannah Stanley (who was enslaved) and Fabius Haywood, who historical records suggest was Hannah’s enslaver. During her childhood, she was hired to work in the home of a prominent lawyer, which enabled her to be surrounded by books and education that would develop into a lifetime obsession with the cause advancing African American education. She went to high school at St. Augustine Normal and Collegiate Institute (now St. Augustine’s College), where she first experienced sexism. As she was discouraged from learning Greek and Latin, her male classmates were actively supported in learning these same subjects as preparation for entering ordained ministry. To her credit, Cooper successfully petitioned to take these classes at St. Augustine.

It was at this time that she met Rev. George A. Christopher Cooper from Nassau, British West Indies, and they were married a short time later on June 21, 1877. He was the second Black ordained clergyman in the Protestant Episcopal Church in North Carolina. But their life together was cut short. Two years later, George Cooper died and left Anna J. Cooper a widow at the young age of 21.

After graduating, she was accepted to Oberlin College, notable for admitting Black men (1835) and Black women (1837) in a time when racial integration on college campuses was unthinkable for nearly every other institution of higher education in the United States. She enrolled in the B.A. program rather than the “Ladies’ Coursework” designed to be less rigorous and focused towards vocational skills. She earned a B.A. in 1884 in the Classics, and then went into the teaching profession, where she focused on improving the education of Black students. It was from her teaching after graduating that led to Oberlin granting her an M.A. in Mathematics in 1887. She then went on to a highly successful teaching career in Washington, D.C. at the prestigious “M” Street School. During the early Washington, D.C. years, she established a formidable reputation within the African American community and beyond as a scholar, orator and community activist.

In 1892, Anna Julia Cooper published A Voice from the South: By a Black Woman of the South, a vivid collection of essays and lectures she had delivered in previous years. Cooper is regarded as one of the most prominent Black female intellectuals of the era, and this book is widely considered her most important book, reprinted over the decades many times. In it, she contributed ground-breaking insights on the condition of Black people (specifically Black women) in the United States. In a short, but powerful opening statement, Cooper wrote:

A Voice from the South remains a foundational text in the development of sociological and literary theory. Cooper demonstrated the significance of class and labor, and through her work she engaged in debates (both indirectly and directly) with the great “race men” of her time like W.E.B. Du Bois, Booker T. Washington, Frederick Douglass, and Martin Delaney, as well as female activists such as Sojourner Truth, Frances Watkins Harper, and Ida B. Wells-Barnett. It is also one of the earliest articulations of understanding how the complex intersection between gender, race, and class impacts individuals.

Perhaps the most significant contribution Anna Julia Cooper made in this book was explaining how Black women in America held a unique space — distinguished by being at the bottom of the social hierarchy, both in terms of race and gender. Yet because of their positionality, they possessed a unique voice that needed to be heard.

Cooper famously captures the intersection of race and gender in her account of a moment on a railway trip in the South:

And when…our train stops at a dilapidated station…and when, looking a little more closely – I see two dingy little rooms with, “FOR LADIES” swinging over one and “FOR COLORED PEOPLE” over the other…while wondering under which head I come.

Two signs, one for women and another for Black people, highlighted how she occupied two statuses simultaneously, both subject to discrimination through different exertions of societal power. She further draws this out in this excerpt:

The colored woman of to-day occupies, one may say, a unique position in this country. In a period of itself transitional and unsettled, her status seems one of the least ascertainable and definitive of all the forces which make for our civilization. She is confronted by both a woman question and a race problem.

Cooper not only described the intersection of social status but also believed that the most important witness in society, the Black woman, had been rendered mute and voiceless. She therefore used her own speaking, teaching, and writing – her “voice from the South” – to advance her belief that when Black women were educated, they became perfectly poised to influence and contribute to society and the world at large. She asserted:

Only the Black woman can say ‘when and where I enter, in the quiet, undisputed dignity of my womanhood, without violence and without suing or special patronage, then and there the whole Negro race enters with me.’

After completing A Voice from the South, Cooper spent time publishing several other works, and became the principal at M Street high school in 1902. She was part of a long controversial protest opposing the Board of Education’s decision to dilute the curriculum of “colored schools.”  With severe political and racial pressures and thus the media against her, together with a City ruled by Congress, the Board of Education decided not to re-appoint her. While managing her activism and career, she also had responsibilities of caring for two adopted children and her deceased brother’s five children. In 1914, she started a PhD at Columbia University, but had to stop her schooling because her thesis was rejected. Persevering, she was eventually able to transfer her PhD credits from Columbia to the University of Paris Sorbonne (11 years later), and earn her PhD in History in 1925 at the age of 67. Anna Julia Cooper was the fourth African American woman to earn a PhD. After this, she returned to the D.C. area and continued to teach until she retired from teaching in 1930.

Anna Julia Cooper maintained a life of active community service in Washington, D.C., helping to found and/or maintain the Colored Women’s League, the Colored Social Settlement, the Colored YWCA, the Washington Negro Folklore Society, the Bethel Literary and Historical Society, Frelinghuysen University, and the Hannah Stanley Opportunity School, in memory of her mother. She went on to serve as President of Frelinghuysen University from 1930-1941, renting her own house at 201 T Street to the University in 1931, after it had lost its downtown location. Even late in life, Cooper continued to write, publishing a poem entitled “Grapes from Thorns” in December 1958, at 100 years of age. Cooper died on February 27, 1964 at the age of 105. Her legacy continues in the District and beyond as a dedicated educator, author, sociologist, and scholar, and there’s still much we can learn from Anna Julia Cooper’s life.

Finally, it is interesting to note that millions of Americans have likely seen Cooper’s writing in an unexpected place. This is because Anna Julia Cooper also holds a unique honor. She is the only African-American woman who is quoted in the US passport. These are her words as they appear in the passport:

This came out of her activism in the community as she openly confronted leaders of the women’s movement for allowing racism to remain unchecked within the movement. In “Woman Versus the Indian,” Cooper responded to an essay of the same name by Ann Shaw. Shaw was a leader in the movement who placed the issue of white women’s rights against the rights of Indigenous peoples. Cooper issued a call for the inherent rights of all people, but specifically targeted those typically denied those rights. It is in this essay that her quote in the US Passport appears.

There’s so much more to learn about the life, work, and social theories of Dr. Anna Julia Cooper, so check out these resources!

A Washington Life: the Sociology of Anna Julia Cooper (The Sociologist, 2017)

Additionally, here are some of her most often quoted words: TOP 25 QUOTES BY ANNA JULIA COOPER