The Legacy of Hercules and Hemings – America’s Black Founding Chefs 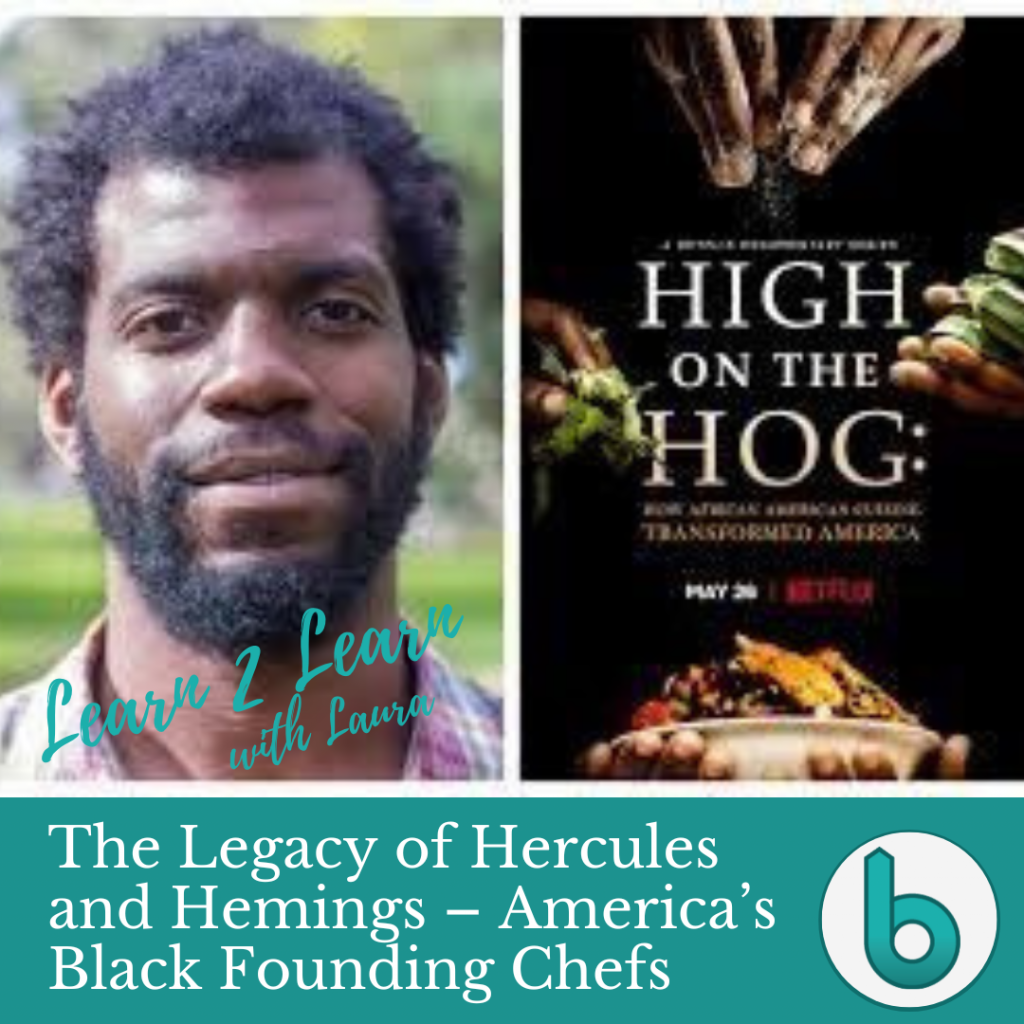 Some friends recently recommended the Netflix docuseries High on the Hog: How African American Cuisine Transformed America (Netflix 2021), which traces the rich history of Black Heritage cooking and how it has influenced American cuisine. It piqued my interest and I wanted to learn more — not just because I love cooking shows, but also because it was an aspect of African American history I hadn’t explored, and I’m always looking to learn.

Chef and author Stephen Satterfield is “on a journey to uncover the stories of African American food, and meet the new generation preserving our history.” Over the course of the show, he traces the throughlines of this cooking from Africa to Texas, showcasing its rich history and how it has influenced American cuisine. The docu series is beautifully done, and as I watched, I was thoroughly engaged in how much of American food has its roots in African American food.

Most interesting for me was Episode 3, “Our Founding Chefs,” which walked through the stories of the renowned enslaved chefs of George Washington and Thomas Jefferson — Hercules Posey and James Hemings. What has been unearthed about their lives by historians is a profound reframing of history that informs us in the present. It had never occurred to me that the fancy meals we may imagine the founding fathers eating were not just prepared by enslaved African Americans, but they were designed and created by them. Today we might call them “master chefs.”

Hercules arrived at Mount Vernon as an enslaved teenager in 1767. He soon became one of the estate’s cooks, and was later the chef for President George Washington while the president’s house was in Philadelphia, PA. He was a very accomplished chef and cooked for the Washingtons’ friends, family, members of Congress, and foreign dignitaries. Many of the people who ate at the president’s house celebrated Hercules’ food.

I was able to learn more about Hercules from the Mount Vernon website:

Due to his culinary prowess, Posey asked Washington if his son Richmond could also work in the kitchen in Philadelphia. Washington agreed and Richmond was allowed to work with his father. According to [Washington’s step-grandson George Washington Parke Custis], Posey earned “one to two hundred dollars a year,” by selling leftovers, known as slops, from the presidential kitchen. Hercules was a “celebrated dandy,” in the words of Custis, and the chef kept an equally meticulous kitchen: “Under his iron discipline, wo[e] to his underlings if speck or spot could be discovered on the tables or dressers, or if the utensils did not shine like polished silver.”

Hercules was permitted to sell kitchen leftovers, such as bones, feathers, ash and fat, and keep his extra earnings. He used this to purchase fashionable attire that wasn’t usually available to enslaved people. It was recounted by Washington’s step-grandson that Hercules was known for taking evening strolls on the promenade through the streets of Philadelphia in his finest clothing, “greeting friends with a formal and respectful bow.”

In Pennsylvania, enslaved people were considered free if they lived in the state more than six months. So Washington, unfortunately, would make sure he returned them to Mount Vernon before the six months were up, in order to restart the clock.

In 1797, Hercules ran away from Mount Vernon. Washington made several unsuccessful attempts to find him, but he was never found. Washing believed that Hercules escaped to Philadelphia, and had used the connections he had formed in the Quaker or free Black communities to hide in the city.

To learn more about Hercules, watch this video from George Washington’s Mount Vernon and browse their website. To learn more about Posey’s flight to freedom, listen to this podcast episode Intertwined Stories: Finding Hercules Posey.

James Hemings came to Thomas Jefferson’s Monticello home as a nine-year-old boy, as part of an inheritance. He is an older brother of Sally Hemings, who is well known for bearing several of Jefferson’s children. James was first a personal attendant and valet to Jefferson, along with his brother Robert. As he grew up at Monticello, Jefferson, who was very ambitious about the kind of food and cuisine he wanted served in his household, saw qualities in James that he thought would make him well-suited for the kitchen.

In 1784, when Jefferson later served as a foreign minister in France, he took 19-year-old James with him and had him trained in the art of French cooking.

He studied first with the caterer and restaurateur, Monsieur Combeaux, apprenticed with pastry chefs and then with a cook in the household of the Prince de Condé. After three years of study he became the head chef at the Hôtel de Langeac, Jefferson’s residence that functioned also as the American embassy. Here his dishes were served to international guests, statesmen, authors, scientists, and European aristocrats. His wages of twenty-four livres a month were a regular income (and more than the occasional gratuity he received in the United States), but that salary was half of what Jefferson paid his previous chef cuisinier.

In 1789, Hemings returned to the United States with his sister and the Jefferson family. Jefferson was immediately appointed the ﬁrst Secretary of State and assigned to New York and then Philadelphia, so Hemings stayed with him as a cook and valet. In 1793, Jefferson promised to free Hemings if he trained his successor.

They both returned to Monticello in 1794, and Hemings transformed dining at Monticello with his prowess in cooking French cuisine, aided by the new multi-burner stew stove. As agreed, he began training his brother Peter to become his replacement. In 1796, James Hemings left Monticello as a literate free man with $30. Over the next ﬁve years, he put his valuable culinary skills to work in Philadelphia, Baltimore and possibly Europe.

In February 1801, Jefferson tried unsuccessfully to recruit him as chef de cuisine at the President’s House. In August, Jefferson persuaded James to cook for him for two months at Monticello as a paid chef. Hemings left Monticello for the last time shortly after his brief employment during the late summer of 1801. In October, Jefferson was given the tragic news that Hemings had likely taken his own life. From Monticello:

We will likely never understand the full measure of Hemings’s trials. But for a Black man negotiating freedom and slavery in a drastically unequal world, we can imagine some of the horrors he faced. Hemings’s life was cut tragically short and was beset by tribulation, but he negotiated, resisted, and reasserted his agency time and time again, and ultimately he left an important legacy in culinary history.

This short video from the Monticello website about James Hemings creating French cuisine gives a picture of the skill he had.

Hercules and Hemings were two of the most important chefs in American history, and they’ve never gotten credit for it. Both Hercules and Hemings mastered elegant meals over an open fire, known as “hearth cooking.” Later Hemings brought and perfected the stew stove from Europe, and he is credited with bringing French fries and mac & cheese to America. In the film, it was speculated that recipes Martha Washington was famous for could actually have been recipes from Hercules. One chef on High on the Hog mused that Hercules and Hemings were the “first celebrity chefs” and I absolutely agree!

The documentary series is based on a book by the same name, by acclaimed cookbook author Jessica B. Harris, High on the Hog: A Culinary Journey from Africa to America. Harris spent much of her life researching the food and foodways of the African Diaspora. High on the Hog is the culmination of years of her work, and the result is a most engaging history of African American cuisine. She is featured in Episode 1 as she takes Satterfield to West Africa to trace the origins of the food that defines Black cuisine in America. It was clearly an emotional journey for him to be on the ground in West Africa in the Dantokpa open air market, as well as to be there with the legendary Jessica Harris, whom he affectionately calls “Dr. J.”

High on the Hog was a joy to watch…and learn from! I appreciated the chefs, historians, and activists featured in the film who are keeping centuries-old traditions alive. I’m glad to see the master chefs, Hercules and Hemings, getting the attention they deserve. It struck me how this docuseries showed once again that African American history IS American history, this time from the perspective of food and cuisine. As Satterfield says at the beginning of the show:

I’m always thinking about food, how it connects us through time, across geography, from generation to generation. It tells stories about where we’ve been, where we are, and where we’re going. The truth is, a lot of American food has its roots in African American food, traditions, and ingenuity.

It’s never easy looking at the period of enslavement in our country. Sometimes educating yourself is painful at the same time it is also healing. So as I continue to learn, I’m always looking for where the dignity of African Americans is being restored and elevated. High on the Hog masterfully brought that sense of restoration of human dignity by honoring the expertise and contributions that enslaved people made toward the building of this country. And Satterfield’s desire to frame the show as a celebration rather than just focusing on the hardship, brought out a sense of joy in the deeply rooted food culture that has been created over time. It was powerful seeing the development of a cuisine with its roots in Africa and forged through the fire of America — one which absolutely deserves to be celebrated!

Laura Martí is Content Creator and Resource Curator for Brownicity. Trained as a microbiologist and currently a wife and mother of four, she has been on an antiracism journey since the death of Trayvon Martin. She shares from her own learning with the goal of educating others and lifting up the dignity of every person.