The Controversial Court Case of Fred Korematsu — A Story of Exclusion 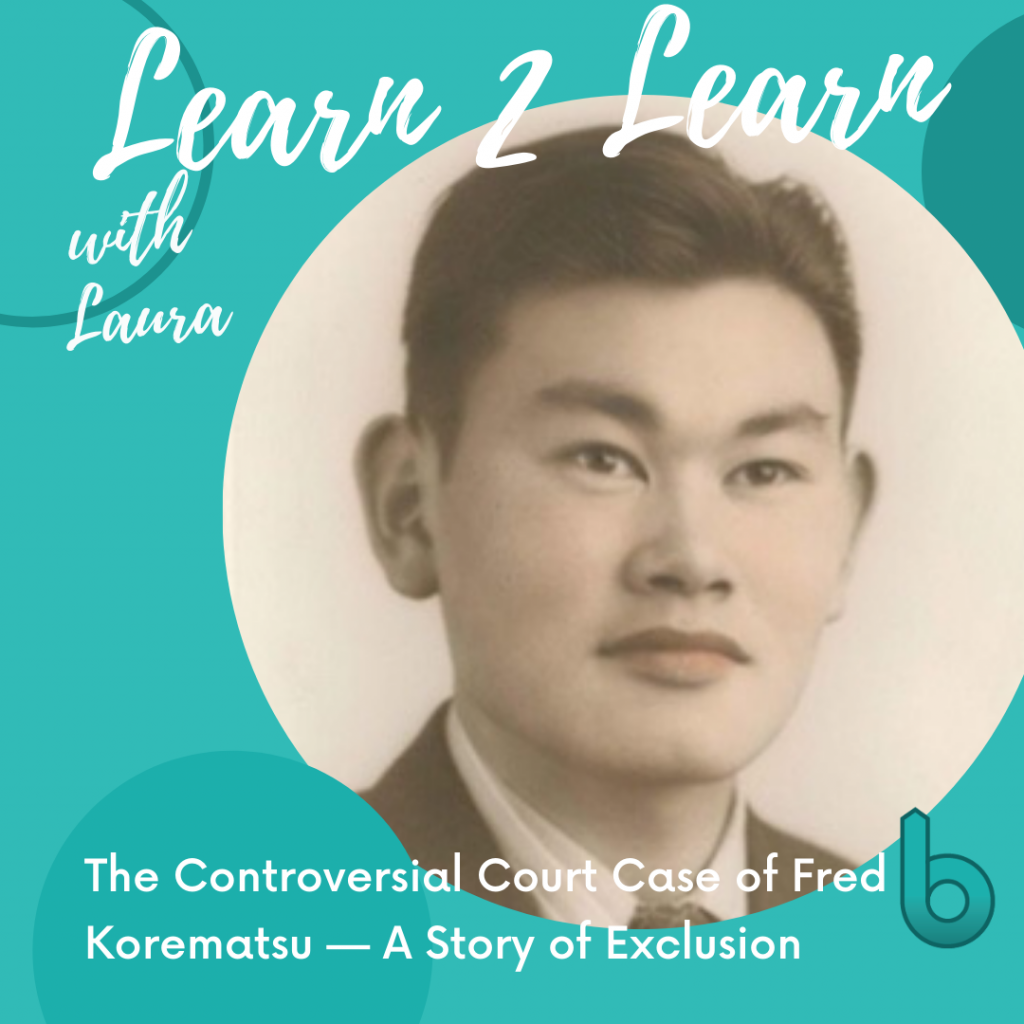 Fred T. Korematsu was a national civil rights hero, although we don’t often hear his story. He courageously fought for civil rights – as a Japanese American whose rights were taken away from him. His defiance led to a historic test of liberty and an infamous Supreme Court precedent that still looms over American law today.

On Memorial Day in 1942, Fred Korematsu was walking down a street in San Leandro, California, with his Italian American girlfriend, when police arrested him on suspicion that he was Japanese.

Three weeks earlier, the U.S. Army had ordered “all persons of Japanese ancestry” to leave the Bay Area in California. The military was rounding up Japanese-Americans and Japanese immigrants all along the West Coast and putting them in concentration camps (also called internment camps). About 110,000 people in total were forced into these camps, most of them American citizens. It was one of the worst civil liberties’ violations in American history.

Korematsu, a 23-year-old welder born in Oakland to Japanese immigrant parents, refused to comply with the order. He tried to hide his identity from the police in the hopes of avoiding being sent to a camp and moving to the midwest with his girlfriend to get married. But as police suspicions grew, he gave them his real name and confessed that his family was Japanese. The entire incident cost him his freedom and his girlfriend.

Korematsu was transferred to military custody at the Presidio in San Francisco and charged with violating a recently passed federal law that made it a crime to ignore a military relocation order.

While in jail, he was visited by Ernest Besig, the director of the San Francisco office of the American Civil Liberties Union, who asked Korematsu if he was willing to become the test case to challenge the constitutionality of the government’s imprisonment of Japanese Americans.

His resolve grew after military police moved him to the Tanforan assembly center, a former racetrack where the Army held 7,800 people, including his parents and three brothers. Korematsu was assigned a horse stall with a cot, a straw mattress, and one light bulb hanging down. The camp, he decided, was worse than jail. On top of that, his father, his family members, and others were not happy with him, worried that what his challenge to the law was going to make it worse for everybody, so he was largely shunned at the camp.

Korematsu tried to defend his loyalty at his trial in federal court in San Francisco in September 1942. “As a citizen of the United States I am ready, willing, and able to bear arms for this country,” he said. He testified that he had registered for the draft and tried to volunteer for the Navy, that he had never been to Japan, couldn’t read Japanese, and spoke it poorly.  Nevertheless, the judge found Korematsu guilty of violating the removal order, sentenced him to five years probation, and allowed a military policeman to take him back to camp.

Fred Korematsu appealed his case all the way to the Supreme Court. On December 18, 1944, in a 6-3 decision, the Supreme Court ruled against him, upholding Korematsu’s conviction, arguing that the incarceration was justified due to military necessity.

In the majority opinion, Justice Hugo Black wrote, “Korematsu was not excluded from the Military Area – the West Coast – because of hostility to him or his race, [but because of] ‘military dangers’ and ‘military urgency.’” The fear was that people of Japanese ancestry would carry out sabotage during a Japanese invasion of the West Coast.

Three justices wrote alarmed dissents. The most powerful statement came from Justice Robert H. Jackson, who said, “The Court for all time has validated the principle of racial discrimination in criminal procedure and of transplanting American citizens. The principle then lies about like a loaded weapon, ready for the hand of any authority that can bring forward a plausible claim of an urgent need.”

Justice Frank Murphy, who also dissented, wrote: “[The] exclusion goes over the very brink of constitutional power and falls into the ugly abyss of racism.” He concluded that Korematsu’s right to equal protection, freedom of movement, and due process had all been violated.

And Justice Owen Roberts wrote, “This is a case of convicting a citizen of punishment for not submitting to imprisonment in a concentration camp, based on his ancestry.” He believed that in focusing solely on the question of exclusion the court had “shut its eyes to reality.”

Fred got word of the Court’s decision in Detroit. He later recalled, “I just couldn’t believe it. It just seemed like the bottom dropped out. I felt like, ‘Am I an American or not?’”

After his incarceration, Korematsu married, had kids, moved back to California in 1949, and worked as a drafter, though his job prospects were always limited by his criminal conviction. For decades, he found his memories of the case painful and rarely spoke of it. His children learned about it in their high school history class.

In the early 1980s, a legal historian, UC San Diego Professor Peter Irons, and a researcher, Aiko Herzig-Yoshinaga, discovered key documents that the US government intelligence agencies had hidden from the Supreme Court in 1944, which consistently showed that Japanese Americans had committed no acts of treason to justify mass incarceration. With this new evidence, Korematsu’s 40-year-old case was reopened on the basis of government misconduct.

On November 10, 1983, a Federal District Judge in San Francisco found that the government had relied on “unsubstantiated facts, distortion, and the representations of a military officer whose views were seriously infected by racism.” She vacated Korematsu’s conviction. It was a pivotal moment in civil rights history. What she could not do, of course, was overrule the Supreme Court decision itself.

Korematsu became a civil-rights activist, lobbying Congress to pass the Civil Liberties Act of 1988, which gave compensation and an apology to former wartime detainees. In 1998, he received the Presidential Medal of Freedom, the nation’s highest civilian honor, from President Bill Clinton.

Today, Korematsu v. U.S. is often described as one of the Supreme Court’s worst precedents. Widely rejected but never officially overturned, it is part of an anti-canon that legalized discrimination, along with Dred Scott v. Sandford, Plessy v. Ferguson, and Buck v. Bell.

It’s interesting to hear some of the justices in our lifetime comment on the case. Justice Stephen Breyer, in a 2010 book, called the decision “thoroughly discredited.”

In 2014, the late Justice Antonin Scalia denounced the decision, but also issued a warning. “[Korematsu v. U.S.] was wrong,” he told law students in Hawaii. “But you are kidding yourself if you think the same thing will not happen again….I would not be surprised to see it happen again, in time of war. It’s no justification but it is the reality.”

The Supreme Court has never had an opportunity to overturn the 1944 decision in an official way. But on June 26, 2018, statements made by Chief Justice John Roberts and Justice Sonia Sotomayor in the context of another case, Trump vs. Hawaii (travel ban), may be the closest the Court will ever come to doing that in the near future. Justice Roberts said:

The forcible relocation of U.S. citizens to concentration camps, solely and explicitly on the basis of race, is objectively unlawful and outside the scope of Presidential authority…The dissent’s reference to Korematsu, however, affords this Court the opportunity to make express what is already obvious: Korematsu was gravely wrong the day it was decided, has been overruled in the court of history, and — to be clear — “has no place in law under the Constitution” (quoting Justice Jackson’s 1944 dissent).

In her own dissent, Justice Sonia Sotomayor (joined by Justice Ruth Bader Ginsburg) considered Roberts’ comments as proof that the Court has finally overturned Korematsu. She said, “Today, the Court takes the important step of finally overruling Korematsu, denouncing it as ‘gravely wrong the day it was decided.’ This formal repudiation of a shameful precedent is laudable and long overdue.”

Fred Korematsu’s resilience is inspiring — I’m so glad I found his story. In my learning journey, I’ve observed that the history of America is a history of exclusion, with the exclusion following from a continual question throughout our history of “Who is considered truly American?” When those in the majority or in power determined a particular group was NOT American, then it historically followed that efforts were made to exclude (eliminate, enslave, intern, incarcerate, deport) that group.

Asian Americans have experienced exclusion, erasure, and invisibility in this country since it’s beginning, and their American-ness has always been in question. It’s way past time they were considered to be Americans with a rich cultural heritage just as much as any German American, Irish American, Italian American, or Scandinavian American. Listening to Fred Korematsu’s story helped me to see that better.

On a recent podcast, Kimberlee Williams, author of Dear White Woman, Please Come Home: Hand Me Your Bias, and I’ll Show You Our Connection, said, “If we make time to listen to someone’s story, instead of assuming what their story is, the barriers between us have to come down. Or…we are hit with this impasse and we make a decision to either walk away or not grow, or to lean in and to grow.” I would rather work to find connections with people, rather than emphasize differences, by taking time to listen and learn. We are all just people who want to belong and be loved, and our country is big enough for all of us to be in-cluded.

On this day, the Supreme Court issues the Korematsu decision – National Constitution Center

US v Korematsu: An Account (by Professor Douglas O. Linder, 2019)