‘The Color of Money’ Education for Antiracism in Banking 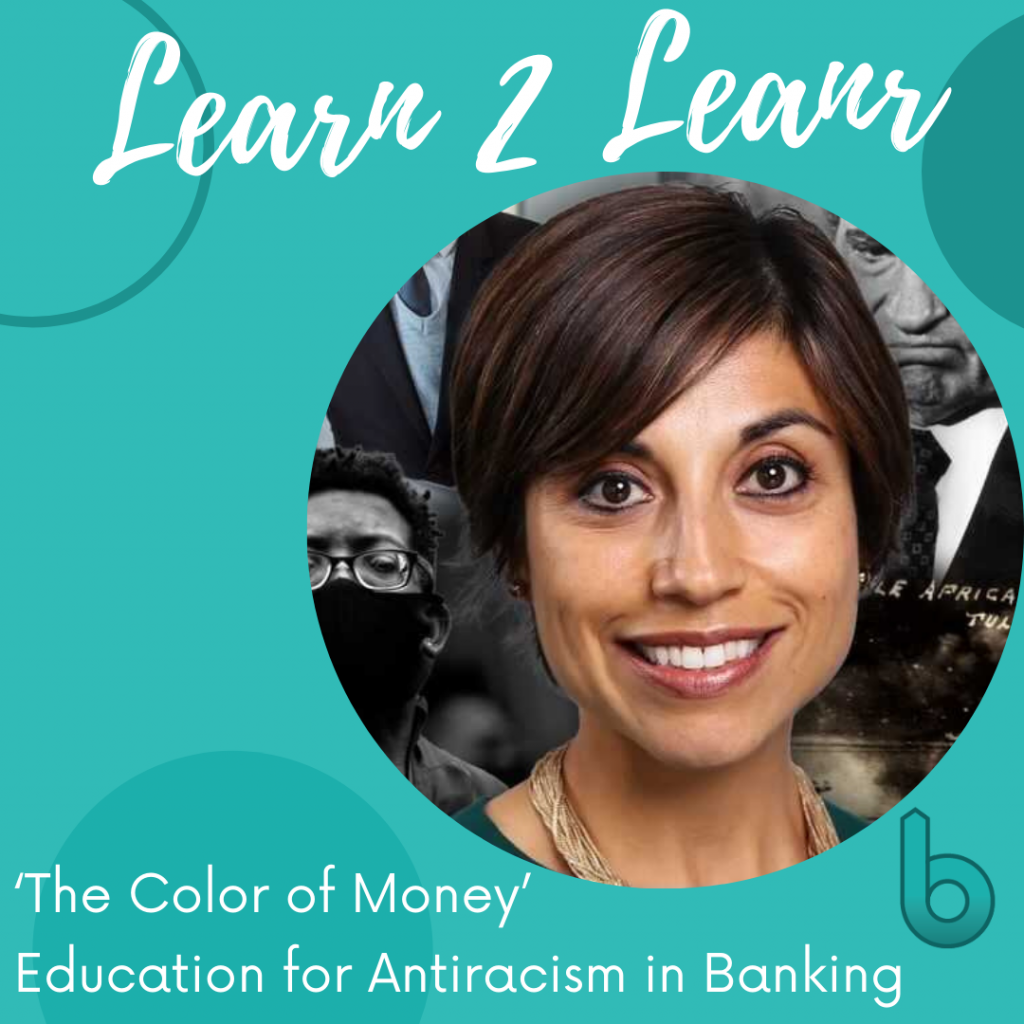 Mehrsa Baradaran is the best-selling author of The Color Of Money: Black Banks and the Racial Wealth Gap and is currently associate dean and Professor of Law specializing in banking law at the University of California, Irvine. She has advised US senators and representatives on policy and spoken at national and international forums including the World Bank. She is also the author of How the Other Half Banks: Exclusion, Exploitation, and the Threat to Democracy.

In the summer of 2018, Dr. Gerardo Marti offered to lead a study group of The Color of Money for our Brownicity team as a professional development opportunity. It was a little out of my comfort zone (anything finance or economics always has been for me 😂), but I took the challenge and found her book to be extraordinary and enlightening. We all learned so much!! One thing that was surprising to me was discovering how much of a setback occurred for wealth-building in the Black community during the Nixon administration.Baradaran writes:

“Nixon’s ‘southern strategy’ was effective because he used race as a wedge issue without actually talking about race. For example, by associating crime with blackness and promising ‘law and order,’ he could signal allegiance to white voters fearful of blacks without sounding like a racist. Black capitalism was another side of the strategy. By associating blacks with welfare dependency and embracing ‘black enterprise,’ he was able to cut economic aid to the ghetto and oppose integration in the guise of promoting black power. By using the unobjectionable and racially neutral rhetoric of free-market capitalism, Nixon undermined black demands for economic redress and reparations.”

If you ever had any question whether systemic racism is real, this book removes all doubt!

Here are a few excerpts to give you an idea what the book is about:

Journalist Ezra Klein perfectly sums up the focus of The Color of Money: “Baradaran focuses on a part of the American story that’s often ignored: the way African Americans were locked out of the financial engines that create wealth in America.”

From the inside jacket:

“When the Emancipation Proclamation was signed in 1863, the Black community owned less than one percent of the United States’ total wealth. More than 150 years later, that number has barely budged. The Color of Money seeks to explain the persistence of this racial wealth gap by focusing on the generators of wealth in the Black community: Black banks. Studying these institutions over time, Mehrsa Baradaran challenges the myth that Black communities could ever accumulate wealth in a segregated economy. Instead, housing segregation, racism, and Jim Crow credit policies created an inescapable, but hard to detect, economic trap for Black communities and their banks.”

When I’m learning something that challenges my beliefs, I love to keep digging in more to see what else I can unearth. I found this excellent article from Market Watch where Dr. Baradaran unpacks her story — her experience growing up as an immigrant, how she came to do this research that no one else was doing, the myths we’ve been told about Black wealth, and so much more. It’s so full and rich with insights, so please check it out!

She shares these thoughts:

“I grew up as an immigrant. My dad was a doctor in Iran, but here he had to do wage work. I really got to see the two sides of America, I guess you could say. I grew up in really low-income areas with kids whose parents worked. And so a lot of the work that I do tries to debunk these myths about poor people as being lazy or just bad with money. It’s just not my experience.”

“And it’s also not my experience that poverty is just the lack of money. There’s a whole system of exposure, that you have in poverty, to violence and power that you don’t experience when you have money. And I think it’s hard to understand for folks who have money.”

“That is one of the biggest myths that we tell right now about the racial wealth gap…This idea that it’s a matter of personal responsibility and culture.”

“We’ve been trying to maintain this lie that you can just give people civil rights and political rights, and not make up to them the fact that you have deprived them of property, and of their wages, and of these homeownership benefits that we’ve given to other people.”

I also learn especially well from hearing people talk and discuss their ideas, because it helps those ideas to sink in better. Fortunately, Dr. Mehrsa Baradaran has been interviewed by an abundance of people and has given many talks, most of which can be found on YouTube. So if you’re interested in listening to her along with your reading of her book, here are a few videos to get you started! She has such an engaging way of talking about a heavy and difficult subject that she just draws you in and makes it understandable.

Here’s a short video interview (17 min) on Amanpour and Company:

For a great conversational discussion of the principles outlined in her book and her research, check out this interview on the Karen Hunter Show on YouTube:

For a more detailed presentation of her research, this conversation with students and faculty at the University of Maryland, Public Policy is particularly full and rich with detail:

Here is her TEDx Talk on Postal Banking (from 5 years ago), where she envisions a new take on an old banking system and a solution for America’s banking deserts:

Happy learning journey! Which of these can you start on today??

Mehrsa Baradaran, author of ‘The Color of Money,’ on why giving people civil and political rights isn’t enough (Market Watch, May 2020)

The Color Of Money: Black Banks and the Racial Wealth Gap, by Mehrsa Baradaran (Belknap Press of Harvard University Press, 2017)