Telling Our Story of Slavery 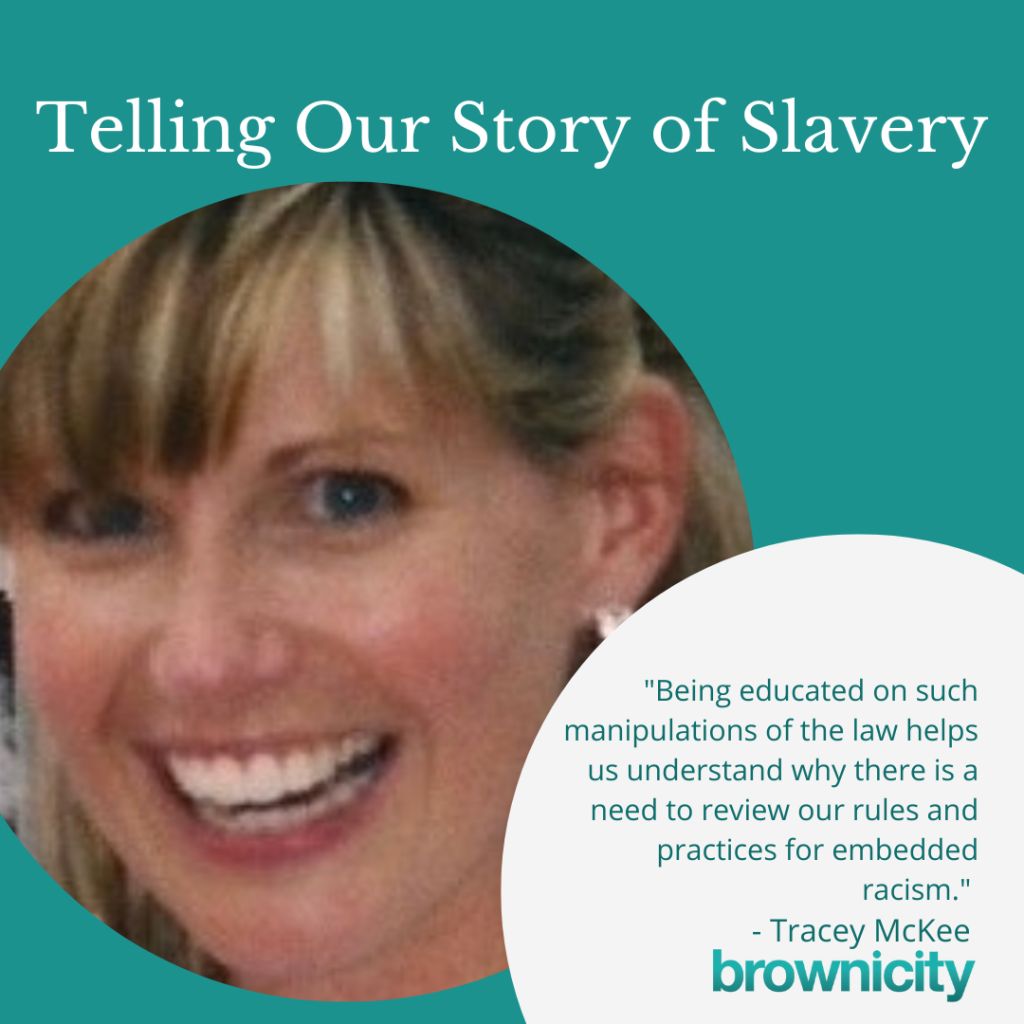 Several years ago, I participated in Brownicity’s What Lies Between Us course. It started me on a journey to understand the racial division that plagues our country and hopefully, to participate in its mending. I learned about the implicit biases I have, the holes in the history I was taught, and I learned about the American experience from the perspective of a Black person. It was eye-opening and prompted me to learn more. I have been reading a lot of material to learn the unvarnished history of our country. The whole truth is both alarming and enlightening, and knowledge of its ugliness is critical for attempting to dismantle injustice.

While reading, I have continued to ask myself what strides have we made, if any, in telling the story of our country more truthfully — especially for people who were taught a very sunny, romantic history that left entire communities of our population in the margins. I came across the book How the Word Is Passed by Clint Smith, a staff writer at The Atlantic. For a couple of years, Smith journeyed to several monuments, museums, and locations to see what attempts are being made to tell the history of slavery and its aftermath. From Monticello to Angola to Whitney Plantation, New York City, and more, Smith found both promise and disappointment.

At Whitney Plantation, about an hour outside New Orleans, efforts are being made to provide visitors with tangible representations of slavery. One exhibit displays the carved heads of 55 black men on stakes. Ten of the heads are named: Mathurin, Cook, Gilbert, Amar, Lindor, Joseph, Dagobert, Komina, Hippolite, and Charles. These men led the largest slave rebellion in US history in January 1811 on the German Coast of Louisiana. The uprising lasted nearly 48 hours, until upon their capture, many of the slaves were killed. The slaves’ heads were chopped off and placed on stakes along the levee as a warning to other enslaved people. Another exhibit at the Whitney includes statues of enslaved children, a poignant reminder of the youngest victims of slavery – many of whom did not survive to adulthood. The point of these exhibits is to tell the story of slavery in a way that words cannot express. And while some have been critical that the Whitney includes displays not original to the plantation, like the Anti-Yoke Baptist Church chapel that was donated to the museum, the Whitney is visited by thousands annually – that number growing yearly.

On his visit to Monticello, the plantation of Thomas Jefferson, Smith was heartened to see that tour schedules included tours devoted to slavery. Jefferson regularly had over a hundred enslaved people working on his plantation. Their work made it possible for him to read, write, and host guests rather than attend to the work of the plantation (Smith 12). David Thorson, Smith’s tour guide, shared a straightforward account of Jefferson’s relationship with slavery. In his own record keeping, Jefferson accounted for his selling, buying, and mortgaging of enslaved people. David shared that “Jefferson also gave presents to his kids and grandkids. Those presents were human beings among the enslaved community” (Smith, 12). At the end of the tour, Smith felt there had been a more authentic, more complex portrayal of Jefferson, including the underbelly of his being an enslaver. Smith noted that several white people in the group were visibly shocked at what they were learning – like the fact that Jefferson sold children away from their families. To his pleasant surprise, he talked with two white women from Texas who were forever changed by what they learned on the tour. Smith even shared pictures of his children with the ladies by the end of their conversation.

“Donna and Grace and so many people – specifically white people – often have understood slavery, and those held in its grip, only in abstract terms. They do not see faces. They cannot picture the hands. They do not hear the fear or the laughter. They do not consider that these were children like their own or that these were people who had birthdays and weddings and funerals; who loved and celebrated one another just as they loved and celebrated their loved ones” (26).

Smith also visited Angola, Louisiana’s State Penitentiary. Unlike the Whitney and Monticello plantations, Smith was disappointed on several fronts. While the tour guide covered that the land was originally inhabited by Native Americans, the Tunica, Roger skipped past the land’s time as a plantation. It became a prison in 1869 when Samuel James leased the land from the state to house inmates. Roger explained that many inmates were leased out to work on the levees and the railroads – brutal work that took the lives of about ten percent of the inmates. Smith was saddened that Roger’s mention of convict leasing did not give a fuller account of the practice :

“In Louisiana, in order to ensure there were more convictions and thus more prisoners available for labor, in 1880 the state legislature shifted the requirement for juries to be unanimous to non-unanimous. This way courts could allow a few Black people to serve on the jury – in accordance with their new rights as freed persons – but by requiring only nine of the twelve to convict someone of a crime, they effectively subverted any political power Black people, or those sympathetic to them, might otherwise have” (88).

Since it benefited from leasing convicts, a tour at Angola provides a clear opportunity to share how laws were passed in Louisiana, and elsewhere, ensuring an ample supply of Black bodies to perform hard labor. Convict leasing was another form of enslavement. Being educated on such manipulations of the law helps us understand why there is a need to review our rules and practices for embedded racism.

I found this book not only to be a wealth of information on how our museums and institutions are reckoning with our story of slavery, but also a goldmine of informative history. Smith’s How the Word is Passed furthered my understanding of issues facing the Black community and how we have arrived at the state we are in today. It is a worthy read for anyone who wants to learn more and deepen their understanding of slavery and its long-reaching consequences.

Smith, Clint. How the Word is Passed. Little, Brown and Company, 2021