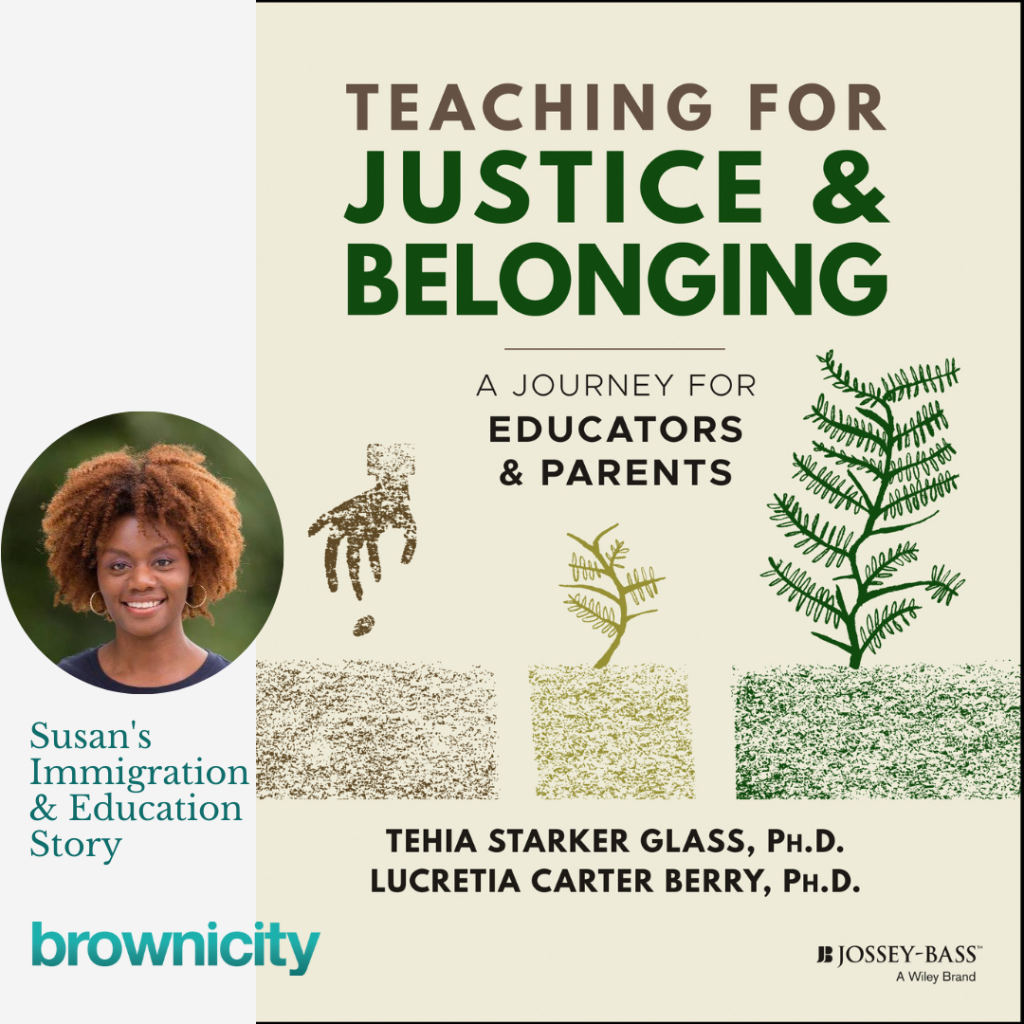 Susan’s story is an excerpt from Teaching for Justice & Belonging, a Journey for Educators & Parents (August, 2022). Included in chapter 7, Weed: Uproot Growth Inhibitors, Dr. Tehia Starker Glass and I list common beliefs and practices that work against cultivating justice and belonging. We then offer guided reflection and suggested practices to support sustainable growth.

In 1980, I arrived with my family of origin from Costa Rica. We lived with relatives in Long Island. Because we moved around a lot, we moved from school to school. We attended schools where often we were the first and only Spanish-speaking students. We were placed in classrooms based on our English proficiency or lack thereof. At one point, one of the schools hired a Spanish-speaking woman for us. She was like our personal angel.

I was tested and skipped a grade. Meanwhile, my brother and male cousins were removed from regular classes and placed in a special education class. Our parents were not happy about this, but they respected the school’s decisions and didn’t question it. On the other hand, I questioned everything, including why I was not allowed to read the same book as my classmate. I also had to consistently advocate for myself – from questioning why others had book choices and I did not to inquiring about why certain classes were selected for me versus choosing them for myself.

Meanwhile, I observed that my brother was stigmatized and labeled. The school determined that he was not going to excel. This really bothered me. Even as a child, I wondered why my brother and cousins were placed in a special education class. Afterall, we came from the same home and background. And my brother would even help me with my homework. I knew he was bright and fully capable of being in classes alongside me.

While I saw my brother and cousins being put on a pathway to prison, I learned to advocate for myself. Because I was in proximity to other students talking about college, I put myself on the path to college. While working in the guidance counselor’s office, I asked how to prepare for college and was enrolled in Upward Bound, a college preparatory program. Through Upward Bound, I received help and support and saw people who looked like me go to college. When I saw other Latinos go to college, I knew I could. I can still recall at the young age of 12 how at home, I constantly asked my mother if I was legally able to attend college. This is when she began the process for my siblings and me to start the green card process.

I believe that due to being placed on a special education track, my brother and cousins internalized that they were not good enough. Although my family discouraged them, my brother and cousins were encouraged by the school counselor to join the military. Eventually, they served time in prison and therefore were never allowed to become U.S. citizens.

My family believed that my brother would get his citizenship. But after prison, my brother was deported immediately. As soon as his sentence was done, Immigration and Naturalization Service (INS) officers rearrested him and deported him. In fact, in the courtroom, after being given his release, immigration immediately came in and took him away. My brother, who could no longer speak Spanish, was sent back to Costa Rica where he had not lived since he was a small child.

As I interviewed Susan, I listened in disbelief. I clearly saw how within systemic and cultural norms, her brother was discredited and devalued. As a child, not only was Susan forced to navigate education spaces that did not see her family as worthwhile, but she also had to develop skills and savvy to place herself on the pathway to college. She learned to become an advocate for herself. Susan is now a brilliant teacher whose respect for students and their families is informed by her painful past. She sees and values everyone. She even sees students who don’t want to be seen. Although Susan was able to become a gift to teaching despite her family being devalued, I can’t help but wonder what might have been if there were not been so many obstacles. Perhaps her brother and cousins would have realized their aspirations as well.

Create a plan to weed out things in your sphere of influence that work against cultivating justice and belonging. Include things like units, lessons, books, language, phrases, posters, practices, attitudes, approaches, old ways of thinking, rules, and policies.

Get your copy of Teaching for Justice & Belonging, a Journey for Educators & Parents and together, let’s learn and grow through case studies, personal stories, reflection, and practicing.

Lucretia is a wife, mom of three, and a former college professor, who founded Brownicity with the purpose of making scholarly-informed, antiracism education accessible in order to inspire a culture of true belonging and justice for all. Her 2017 TED Talk, ‘Children will light up the world if we don’t keep them in the dark’ is well received, as well as her books and courses: