Standing on the Shoulders of Judge Constance Baker Motley 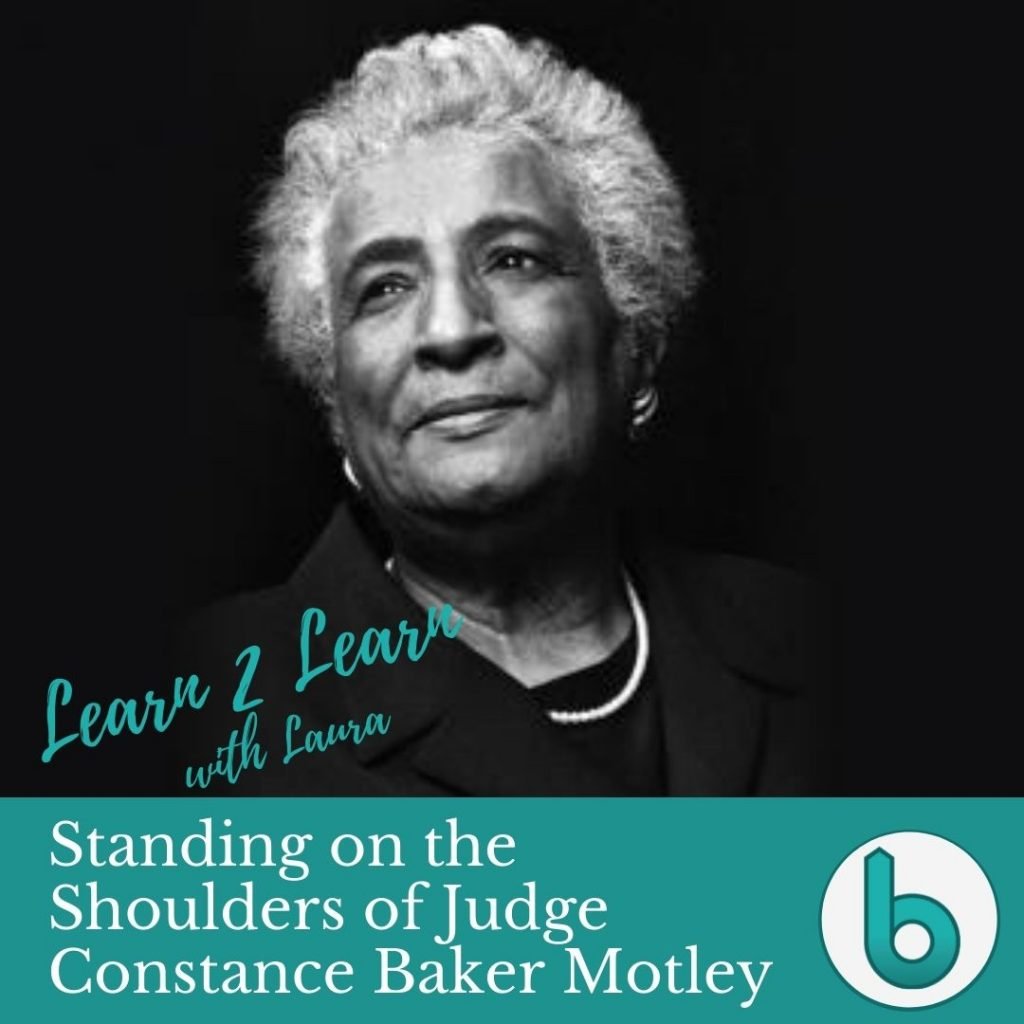 Last week, I shared the excitement of seeing Ketanji Brown Jackson confirmed as the first Black woman justice to sit on the United States Supreme Court. Since then, it has brought so much joy to read accounts and hear interviews of the importance of her confirmation. I couldn’t be more happy for the many Black women and girls who see it as breaking another barrier and opening another door for women of color. It was a long time coming and was so deserved.

In her speech on the White House lawn after her confirmation, she mentioned that she “is ever buoyed by leadership of generations past who helped to light the way,” including her personal heroine, Judge Constance Baker Motley. I had never heard of Judge Motley, so of course I wanted to learn more about her. What was it about this Judge that influenced Ketanji Brown Jackson to pursue a career in law? I was sure it was not an easy path. Here’s what I found.

Motley is widely acknowledged as a major figure in the Civil Rights Movement, especially its legal battles. As the first Black woman to sit on the federal judiciary, Constance Baker Motley worked on civil rights cases alongside Thurgood Marshall at the NAACP legal defense fund. She was integral to the outcome of Brown versus Board of Education, the famous 1954 Supreme Court decision that struck down the separate but equal doctrine.

After graduating from Columbia’s Law School in 1946, she was hired by the NAACP Legal Defense and Educational Fund (LDF) as a civil rights lawyer, joining Robert L. Carter, who later served with Motley as a federal judge.  The boss who hired Motley was future Supreme Court Justice Thurgood Marshall.

As the fund’s first female attorney, she became Associate Counsel to the LDF, making her a lead trial attorney in a number of early and significant civil rights cases including representing Martin Luther King Jr., the Freedom Riders, and the Birmingham Children Marchers. She visited Rev. Martin Luther King Jr. while he sat in jail, as well as spent a night with civil rights activist Medgar Evers under armed guard.

As a front-line lawyer for the NAACP Legal Defense and Educational Fund, Motley personally led the litigation that integrated the Universities of Georgia, Alabama, and Mississippi among others — overcoming Southern governors who literally barred the door to African American students. She opened up schools and parks to African Americans, and successfully championed the rights of people of color to protest peacefully.

In 1950, Motley wrote the original complaint in the case of Brown v. Board of Education — one of the most important cases in American constitutional law — and helped litigate the case.

As the first African American woman ever to argue a case before the U.S. Supreme Court, Meredith v. Fair, she won James Meredith’s effort to be the first Black student to attend the University of Mississippi in 1962. One of the cases Motley argued in front of the Supreme Court was Hamilton v. Alabama, a unanimous 1961 decision establishing the right of defendants in capital cases to assistance of counsel at arraignment.

By the time she left the NAACP LDF in 1965, Motley had personally argued ten Supreme Court cases winning nine outright, with the tenth decision regarding jury composition, eventually overturned in her favor. She assisted in nearly sixty cases that reached the high court. Along the way, she experienced countless courtroom delays and indignities. Motley kept her cool, even as some judges turned their backs when she spoke!

She was acutely aware of the dangers and that her life was always in jeopardy. The threat of violence was constant during Motley’s trips to the South. Barred from hotels, Motley stayed with local rights activists. Even when armed men stood watch, she found it difficult to sleep. In her autobiography, Motley said she never was discouraged by doubts concerning her background. “I was the kind of person who would not be put down,” Motley wrote. “I rejected any notion that my race or sex would bar my success in life.”

Her legal career was not yet over. Motley was nominated by President Lyndon B. Johnson on January 26, 1966, to a seat on the United States District Court for the Southern District of New York vacated by Judge Archie Owen Dawson. Senator James Eastland of Mississippi delayed her confirmation process for seven months. Eastland was in opposition to her past desegregation work including Brown v. Board of Education and Meredith v. Fair. He used his influence as chair of the Senate Judiciary Committee to disrupt Motley’s nomination and went as far as accusing her of being a member of the Communist Party.

Despite opposition, she was confirmed by the United States Senate on August 30, 1966, and received her commission the same day, becoming the first African American female federal judge. She served as Chief Judge from 1982 to 1986. She assumed senior status on September 30, 1986.

Inspiring the Next Generations

Those who remember Motley best have varied explanations of how she found the courage and tenacity to dismantle Southern race laws. But they all agree that Motley exhibited supreme calm and confidence throughout her career.

“While we may have faced challenges on the bench, when Connie lifted her voice, her life was on the line,” wrote Judge Ann Claire Williams, who retired from the U.S. Court of Appeals for the Seventh Circuit in 2018. “Yet time and time again, she lifted her voice higher and higher, arguing cases in hostile towns, against hostile lawyers, and before hostile judges in the pursuit of equal justice.”

“She had extraordinary intelligence, fortitude, personal presence, and a desire to have an impact in the world,” said Laura Taylor Swain, who served as a law clerk for Motley, and later was a fellow U.S. District judge in Manhattan until Motley’s death in 2005. “Projecting that confidence and intelligence is the only way she could have survived and been successful at what she did.”

Judge Motley’s service in New York City terminated on September 28, 2005, when she passed away.

I can see why our new Supreme Court Justice, Ketanji Brown Jackson, admires Judge Constance Baker Motley. She was a key legal strategist in the civil rights movement, helping to desegregate Southern schools, buses, and lunch counters. She inspired many generations of Black women lawyers and invested in many who became judges themselves. She was dedicated, loyal, gracious, and loved what she did.

This helps me understand why Judge Jackson In her acceptance speech in February said “Today, I proudly stand on Judge Motley’s shoulders.”

I’m once again inspired by the resilience, perseverance, and strength of those who push against the barriers of racism to show us that anything is possible. The life of Judge Constance Baker Motley and the confirmation of Supreme Court Justice Ketanji Brown Jackson show us all that Black women belong in these spaces.

To learn more about Judge Constance Baker Motley, check out these resources.