Listening to Latino Voices and Stories 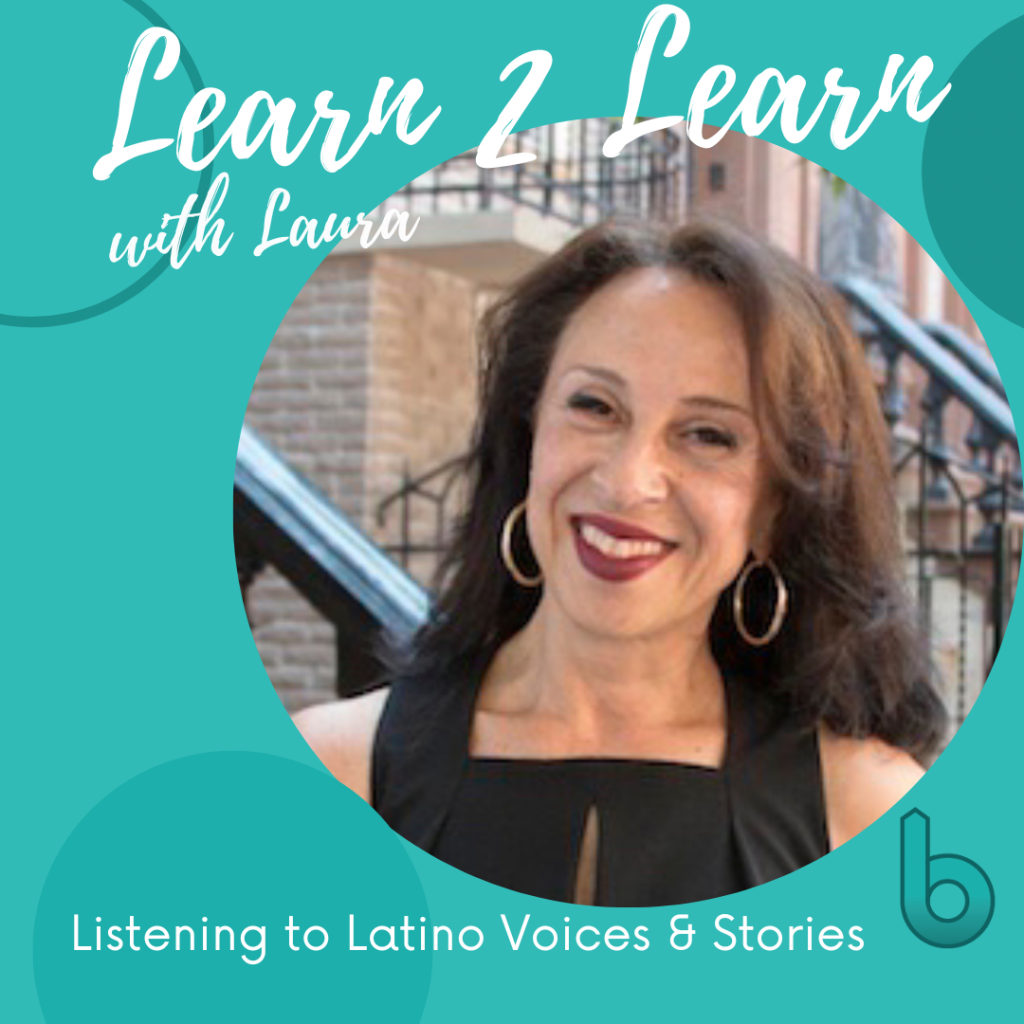 Hispanic American Heritage Month starts this week and runs from September 15 – October 15. Beginning on September 15 signifies the anniversary of independence for several Latin American countries which include Costa Rica, El Salvador, Guatemala, Honduras and Nicaragua (all on September 15th), Mexico (on September 16th), and Chile (September 18).

I get excited about this special month because I feel connected to Latino culture, even though I am not Latino. After college I moved from Ohio to the Los Angeles area, where I lived for 18 years. Los Angeles exudes Latino/a culture everywhere you go. In my first job, I was fortunate to work with people from all over the world, including Philippines, Mexico, Burma, Thailand, Guatemala, and South Korea, just to name a few. Some were immigrants and had very interesting stories about how and why they had come to the US, and others’ families had been there for generations. I married a Cuban American whose parents had come to the US in the 60s as refugees fleeing Castro’s Cuba. At my in-laws’ family dinners, I listened intently to see how much I could understand when they spoke Spanish, but I was also listening to their stories. A few trips to Tijuana and Ensenada, Mexico, to serve the communities there, added to my cultural awareness. I went to a multiethnic church for 8 years that was ⅓ Latino, ⅓ Asian, and ⅓ white, so many of our friends were Latino. Our El Salvadoran pastor used to say “LA inhales the world.” Looking at the 2020 census, this is most definitely true. People from more than 140 countries, speaking 224 different identified languages, currently call Los Angeles home. Though LA has no ethnic or racial majority, 48.1% of the people there identify as Latino/a or Hispanic, the largest group. I felt immersed in Latino culture – it really is all around you in LA. All of these things brought me close to people in a way that contributed to my love and appreciation for the many facets of Latino community and culture.

So when our family moved to North Carolina in 2004, I truly felt a loss of all I had left behind in southern California, including that connection. In my antiracism journey, which began in 2012, I’ve come to realize that it had to include educating myself more about Latino culture(s) and the contribution they have made to this country, both because it meant so much to me personally, and because I wanted to make sure I had it right. So how could I do that? For me recently it has been through podcasts.

During the height of the pandemic, when we were all walking and listening to podcasts, I discovered the Latino USA podcast. Maria Hinojosa is the Anchor and Executive Producer of this Peabody Award-winning show, which is the longest running Latino-focused program on US public media (25 years). She started Futuro Media in 2010, because she was out of a job and couldn’t fathom calling her father (a doctor) to tell him she was on unemployment. She was encouraged by friends to start something on her own and Futuro was born. She didn’t think of herself as an entrepreneur at the time, but she now embraces the label of being a media entrepreneur. Maria Hinojosa is a force for justice and equity in the Latino/a community. Read more of her story here.

What I love about the Latino USA podcast is that they tell stories in a way that gives me a lens into people’s everyday lives that I otherwise wouldn’t have. I feel like I’m sitting at a cafe having a conversation with them over coffee, and at the end I have “walked a mile in someone else’s shoes.” I recently listened to one story about a wildland firefighter (a “Hotshot”) who has dealt with some of the worst fires in US history but loves his job, one about the Black and LatinX college students who were at the forefront of the movement to cancel student debt after being targets of predatory lending, and another about the Mexican-American miners who went on strike in New Mexico in 1950 on which the movie Salt of the Earth was based. Learning from people’s lived experiences challenges the narratives I’ve been told all my life. Some may think it’s painful to wrestle with your own perceptions and worldview, but I find it to be freeing. When I can do this, there’s no room for hate and there’s certainly no need for it. For me there’s just love and appreciation.

As they say on their website, “Futuro Media is committed to telling stories often overlooked by mainstream media by expanding narratives as we report on issues where we see a lack of racial equity.” Discovering Latino USA and Maria Hinojosa was like finding a gold mine where I can go back again and again to get nuggets of wisdom and life, and those keep me moving forward in my journey.

Here are a couple other things I loved listening to.

This short, powerful video (2:51) featuring Maria Hinojosa gives a sense of why she does this work: 👇🏾👇🏽

🔗 Maria Hinojosa’s Brief But Spectacular take on being a powerful Latina in the media (PBS).

MSNBC’s “The Culture Is” is a special four-part series highlighting Black, Latina, Asian, and Indigenous women, elevating diverse voices. In the Latina episode, Actress Justina Machado hosts an honest roundtable conversation with notable Latina women (including Maria Hinojosa) about their experiences as Latinas in America, and how those experiences have shaped them personally and professionally. 👇🏾👇🏽

🔗 The Culture Is: Latina – NBC.com (also available on Peacock)

I once heard Bryan Stevenson, author of Just Mercy, talk about the importance of proximity in justice work. It’s very powerful and it informs me in relation to the Latino American community. He says,

What we do to get proximate [close] to those who are disfavored and excluded, what we do to change narratives, what we do to stay hopeful, what we do that is inconvenient and uncomfortable can sometimes be the most meaningful thing that we do. It is how we honor what it means to have responsibility, to have opportunity, to have privilege.

There are very negative and hurtful narratives that have been told about the Latino community which are not founded in truth or facts. One way I as a white person can be part of bringing change is to be ‘proximate’ by listening to their voices – through books, podcasts, documentaries, and scholarship. Listening leads to understanding and empathy, which leads to a shift in paradigms, which can then lead to a change in the narratives.

We can also advocate for representation and equity where systems are biased against them. When we are willing to push in and get close to people who are seemingly “different” or “other” than us, those differences begin to melt away. We begin to understand the real power we have to promote justice, to break down barriers, and to help others see the truth. We begin to build something beautiful. And once the narratives begin to change, hopefully the needed changes in policies can finally follow.

🔗 Latina trailblazers: We need to confront our political differences for democracy’s sake (clip from The Culture is: Latina)