Finding myself in the story – Uncovering the history of Serbian Immigrants 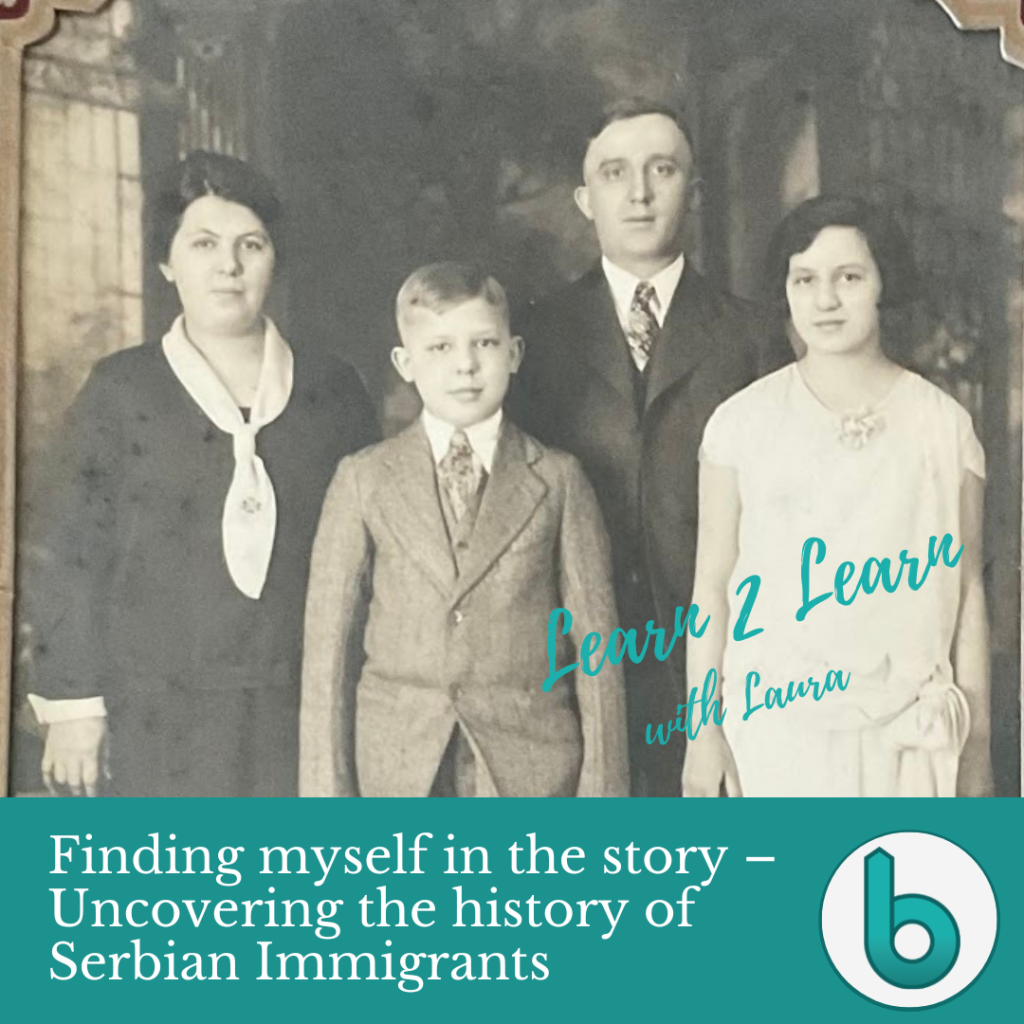 Feature Image: From left: My great grandmother Eva, my great uncle Ray, my great grandfather Joseph Hillrich (changed his last name from Illitch), and my maternal grandmother Helen (Hillrich) Triffun. When my grandmother was in her 20s, her mother passed away due to complications from a back injury.

I have been through the Brownicity course What LIES Between Us (WLBU) multiple times, and one of the things Dr. Lucretia Berry encourages participants to do is to “find yourself in the story.” That admonition has stayed with me. The more immigration has become a contentious issue in the US, the more I’ve been interested in exploring my own family. Where am I in the American story of race?

The U.S. immigration history in the fourth session of WLBU was significant for me personally. My family’s story is one of immigration from southeastern Europe, and what I learned was all new. I grew up in Akron, OH, and we understood ourselves to be 100% Serbian. My paternal grandfather was born in Serbia and came to the US in 1920 when he was 10 years old. The rest came over the generation before, which means that it was my great grandparents who emigrated. They settled in northern Ohio, some in Detroit, likely due to available work as the auto industry began in the 1890s.

The first significant wave of immigration to the United States, from approximately 1820-1896, came primarily from northern and western European countries, such as England, France, Germany, Sweden, Denmark, the Netherlands, and some Protestants from Northern Ireland. Most immigrants from these areas were considered “white” and therefore more easily assimilable. Immigration was driven by forces such as religious and political persecution, poverty, and economic hardship in their home countries, as well as by the opportunities that the expanding frontiers of the American West and the U.S. industrial revolution seemed to provide. Although other groups, like Catholic, Chinese, and Mexican people, also sought to integrate to the United States, they experienced great difficulties in comparison with these earlier, “old stock” Europeans.

Between 1880 and 1920, a second wave of immigrants was drawn to the United States from eastern and southern European countries such as Italy, Greece, Poland, Russia, and “Slavic” countries (including Serbians). These groups also sought work and economic security in America’s growing economy. This is when my ancestors emigrated to the U.S.

These second wave “new” immigrants were not as welcomed in the U.S. as the “old” immigrants. Although American businesses supported an open immigration policy during this time because they needed labor to support industrial expansion, those already here saw them as “foreigners” who competed for the jobs they also sought. They were generally poorer, less educated, and religiously more diverse than the previous wave of northern and western Europeans. Those coming in this dramatic surge of new immigrants were viewed as undesirables who brought crime and disease by previously established groups who now saw themselves as sharing a  White Anglo-Saxon Protestant culture in the United States. This view of Southeastern Europeans was a surprise to me.

Why might my family have made the difficult journey to America? Serbia at the time was split between the Austro-Hungarian empire and a southern portion that served as  a protective buffer between them and the Turkish empire. A majority of Serbian immigrants were from provinces which were under the rule of Austria-Hungary: Croatia, Slavonia, Dalmatia, Bosnia and Herzegovina. They immigrated en masse to the United States to escape highly unfavorable economic and political conditions. The best I can tell, from what my parents remember and pieced together, is that most of my great grandparents came from towns that were under Austro-Hungarian rule. Not many Serbian immigrants came from the southern buffer zone or from the areas under Turkish rule because their living conditions were much better.

Like other newer wave immigrants, Serbians were not readily welcomed into the United States. I had grown up being taught, and accepted the narrative, of America being a “nation of immigrants” and the idealized picture of a “melting pot.” But immigration turns out to be complex and convoluted. I discovered that it is really a history of how well immigrants could assimilate and acculturate, and ultimately who counted as being white – because whiteness most often determined who was considered to be a “true American.” Whoever could attain the status of being a true American could then gain the privileges that came with it.

The decisive factor that determined which ethnoracial groups could immigrate into the United States was based on notions of who would be the most easily assimilated into white American culture. This was the foundation of the “melting pot” theory: that many cultures could come together under one flag, leaving old loyalties and languages behind in favor of Americanization. It was not an embrace of diversity but rather a presumption that certain groups were deemed eligible for this process.

I discovered that my Serbian ancestors were not automatically seen as “white.” What was even more surprising was finding out what Americans thought of Serbians when they first immigrated.

In the early twentieth century, eugenicists believed that various forms of “social inadequacy,” including mental illness, criminality, and physical handicaps, were the result of inherited genetic traits. Some research, such as the Social Inadequacy Chart produced by Harry H. Laughlin in 1922 (shown below), attempted to link these tendencies to specific nationalities and ethnic groups. Biological hierarchies were established that asserted inferiorities not only to people of African and Asian descent but also people from Eastern and Southern Europe. Eugenic researchers provided a “scientific” justification for nativist politicians who sought to legislate exclusionary immigration laws, in order to bar undesirable people from migrating. A series of restrictive immigration laws, like those passed in 1905, 1921, 1924, and 1927, were based on a belief that if “inferior” immigrants were allowed to continue coming into the United States, they would permanently weaken the American nation as a whole because of their bad genes.

To my surprise, Serbians were among the immigrants targeted for restriction based on their supposed genetic inferiority. Even more, Serbians were apparently among the absolute worst of all American immigrants. In The Guarded Gate, author Daniel Okrent says of Laughlin’s charts:

And so on…a roll call of eye-popping statistics that culminated in the apparent evidence that there was nothing quite so terrible as a Serbian, who was six times more likely to be “inadequate” (in any category) than someone of any other ethnic strain — and thus that much more likely to be carrying the perilous genes that would, said Laughlin, “dilute the bloodstream of America.”

Eugenicists produced charts to demonstrate just how awful Serbians were. In the chart excerpts shared below on “feeblemindedness,” “insanity,” “crime,” and “all types of social inadequacy,” notice how Serbians are at the bottom of every list:

Serbians were explicitly stigmatized in encyclopedia-type entries produced by eugenicists who sought to catalog their genetic traits. For example, a 1982 Journal of American Ethnic History article, “Hunkies: Stereotyping the Slavic Immigrants, 1890-1920,” discusses various Slavic (which Serbs are a part of) stereotypes that developed during this time, especially the repugnant characteristics of these “new” immigration. Here are some of the claims made and beliefs held about the “traits” or “characteristics” of Slavic people that the author references:

Yet one more – a physician observed what I suppose he thought was a compliment, saying “Slavs are immune to certain kinds of dirt. They can stand what would kill a white man.”

Wow! What would you think if you read these kinds of things about your family? Honestly, some of it makes me laugh because we now know the “science” these beliefs were based on was so flawed that it can be put in the realm of ridiculous. But it would not have been funny for those enduring it at the time. My family, who left their country because of a combination of economic, political, religious, and other hardships, came to a nation where they were were assigned one of the lowest places on the American racial hierarchy and therefore relegated to the lowest kind of manual labor. That’s sobering.

We think this is a photo of one of the original families who immigrated on my maternal grandmother’s side. The girls in front were the sisters of Joseph Hillrich (mentioned in the first photo) but he’s not pictured. These would be his parents on what they may have called the “family farm,” although the property was not likely much larger than most average homes parcels today.

I’ve had great discussions with my parents, aunts, and uncles to see what they can remember about our previous generations. We recently looked through a box of old photos left behind by my grandma, and it was a beautiful way to bring our family together. My earliest relatives included a plumber, bricklayer, seamstress, and a machinist as well as workers at Firestone and BF Goodrich tire and rubber companies in Akron, and workers at a meat packing company. One of my grandfathers owned his own butcher shop.

My family came to the US looking for better opportunities to live and work, which they did. They probably lived in poverty for a long time and worked to pull themselves out. But I was not in touch with the hardships they likely endured along the way – the hardships endured in the country they left, as well as the hardships of poverty, learning a new language, trying to find work – or the hardships they likely faced being stereotyped and pushed to the bottom of the racial hierarchy. They eventually were accepted as White and over generations have experienced the privileges that come with that, and I am fully aware of the complications that came with this privilege.

What I learned has been eye-opening. It is important to learn to investigate our family histories more closely because it helps us understand where we came from and who we are. And this is true both as individuals and as a nation. We may start with an idea of what immigration is, or was, but may not truly know what people faced and had to deal with to get here. The learning process connecting our family history with our national history gives us new sensitivities for what people are facing today.

I was not aware of the stereotypes surrounding my heritage when I was growing up, but it has helped me to empathize with today’s immigrants. A lot of people react to immigration because they’re afraid of what it means for them. The question is, are we perpetuating the same kinds of stereotypes and narratives today that are not based in truth? I am working toward dismantling those stereotypes by understanding my heritage better. Where are you in the story of race?

Immigration of the Serbs to America

The Image of the Slav in US History and in Immigration Policy – Joseph S. Roucek, The American Journal of Economics and Sociology, (January 1969).

American Blindspot: Race, Class, Religion, and the Trump Presidency – by Martí, Gerardo  (Chapter 4: A “True American” Identity – Immigration and the Restriction of Citizenship)

Working Toward Whiteness: How America’s Immigrants Became White: The Strange Journey from Ellis Island to the Suburbs – by David R. Roediger

The Guarded Gate: Bigotry, Eugenics and the Law That Kept Two Generations of Jews, Italians, and Other European Immigrants Out of America – by Daniel Okrent

The Immigration Act of 1924 | US House of Representatives: History, Art & Archives